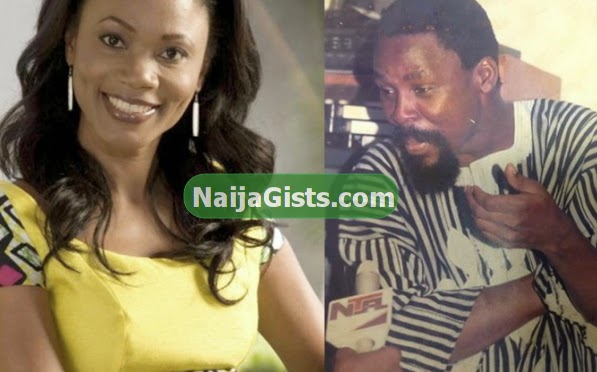 Iyanda said she had two interviews with the alleged miracle worker, one in 1997 and another one in 2006. She further alleged that the tape of the interview was stolen by one of TB Joshua’s staff in her office.

The OAP who said TB church members appeared lost raised a serious allegation of brainwashing against the man.

Iyanda said her heart bled when she saw people crawling on their kneels begging TB Joshua for prayers.

Check out her Tweets below:

Had 2 encounters with pastor Joshua. In 1997 I had a 2 hour interview with him and church members, the tape “disappeared” in our office.
In 2006 I met him at new synagogue, he asked what l thought of the church. I said it was nice but wasn’t it more important to build people?
At each encounter he said my “spirit” was rather strong. I took it as a complement.
He is charming close up, hard to dislike, effect on his multi racial congregation mesmerising. I saw what easy prey the desperate would be.

As per the disappeared tape, someone in his congregation close to the staff probably stole it. Hours of prime sparring. I was 25.
At last encounter people from around the world would kneel at the door and crawl on knees to his presence to speak to him. My heart cried.

I had asked him about building people not houses because everyone l saw at the church looked lost. To his credit, he remained courteous.
I have interviewed or had close conversations with most of Nigeria’s top pastors. I don’t agree with most but none was dislikable close up.
Yemisi Ogbe is right, they are like stars pulling in the lost, afraid and confused in a world of celeb culture and nation of truncated hopes
Religion in Nigeria feeds fat on the carcass of people’s broken lives, unregulated by a weakened state. God save us all;).

There are a few decent male and female religious leaders, tenderly guarding their usually small congregation toward empathy and humanity,
It’s the same qualities that make TB Joshua appealing, popular strong, that keep GEJ the same. We underestimate ‘simplicity’ at our peril.

Both men control hearts, minds, nations. While the elite snigger and snort.
We ask too much of the gullible miracle seekers to abandon what looks like real hope. Without viable alternatives, fake miracles appeal.

“Can Nigerian politicians bring a charge against TB Joshua? Hell no? Can me and you insist on justice? Like many other things, no.”

May the souls of the South Africans, Nigerians and others who lost their dear lives rest in perfect peace.