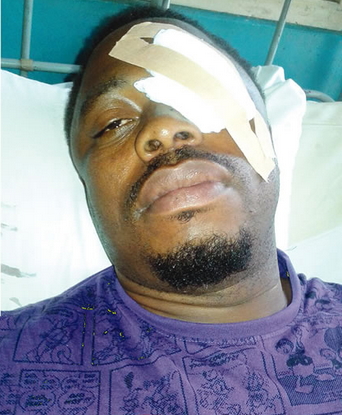 A Lagos-based interior designer, Stephen Akams, is currently on admission at the University of Benin Teaching Hospital with a damaged eye.

The 41-year-old man said a medical result he would get on Thursday (tomorrow) would determine whether he would see clearly again with his left eye or not.

Metro Plus learnt that Akams was battered last Thursday, March 24, along the Benin bypass, Edo State, by some policemen numbering about seven while he was returning from an assignment in Enugu State.

It was learnt that four of the policemen were in a vehicle ahead of a commercial car conveying the artisan.

The police van was allegedly in the middle of the road, moving at a slow speed when the driver of the car signalled to overtake it by blowing the horn. It was, however, said that the policemen refused to give way for the driver.

Akams, who spoke with our correspondent on the telephone, said he also signalled at the policemen when the blockade persisted, but they took offence and flagged down the car.

He said, “Our driver was driving at a speed limit of about 70 kilometres per hour, but the police vehicle was going slower in the middle of the road.
“In an effort to go past the vehicle, our driver sounded the horn, but the driver, who eventually turns to be a policeman, started abusing us.

“When we managed to go past them, I signalled at the driver of the vehicle to caution him. That was when they started chasing us and overtook us. One of the guys at the back seat pulled a gun and threatened to shoot if we didn’t stop.

“We were not sure who they were, so we decided to reverse and that was when we discovered that another white vehicle was following us. They trapped us between them. They came down with their guns – about six or seven of them – and dragged me out of the vehicle. They accused me of insulting police officers and beat me up.”

He said the policemen turned down his entreaties, bundled him inside the boot of their car, and whisked him away into a bush.

“They asked me to bring N100,000 for them to release me. I told them I didn’t have the money. After they had driven for about two miles with me in the boot, they parked and brought me out and started beating me again. When one of them saw the hand band my friend’s daughter made for me and another one I bought in Ghana in 2012, they said I was a cultist.

“I refutted the claim and the beating continued. They brought handcuffs and threatened to take me to the Department of Criminal Investigation. One of them brought a fan belt and repeatedly hit me in the head.”

The Delta State indigene explained that the policemen fled the area after the belt hit him in the eye and he became unconscious. He added that it was the driver of the car he boarded that trailed him to the scene and took him to the hospital.

“It was the fan belt that hit my left eye and caused serious damage. I am still on admission at UBTH with blurred vision and in serious pain. I cannot see much with the eye and I am not sure when I am leaving the hospital because of the injury. The doctor said I would know my fate on Thursday (tomorrow),” he said

Akams told Metro Plus that policemen at the Ugbowo division near UBTH directed him to the state police command when he reported the incident.