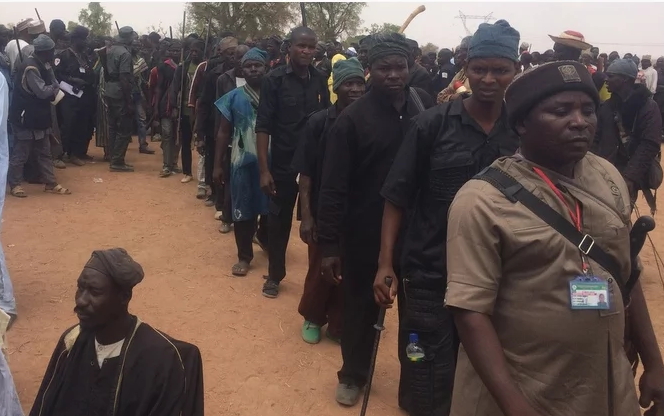 At least 10,000 local hunters from 6 North-Eastern states have vowed to rid the society of criminals.

The local hunters, who gathered recently in Adamawa State for their annual oath-taking festival, known as Salala in the local parlance and dressed in their warfare attires, with their dane guns dangling over their shoulders, appealed to government to make use of their members in the fight against terrorism and other social vices.

The leader of the hunters in Adamawa, Muhammad Tola, who claimed the hunters had so far played significant roles in the fight against Boko Haram, said hunters were familiar with the terrain in dreaded forests, like the Sambisa Forest.

His words: “We are ready to pursue the terrorists because we know the terrain very well, we are appealing to the military authorities to allow us join the fight against Boko Haram at the Sambisa Forest,” Tola said, adding that the hunters needed the government to assist them with ammunition, transportation and logistics.

He said the government could also enlist young hunters who were willing to join the army, police, and other security agencies.

“We remain one big family devoid of religious or tribal sentiments, that is why you can see over 10,000 hunters from Taraba, Gombe, Bauchi, Borno, Yoba and Adamawa converged for this epoch-making event,” Mr. Tola said.