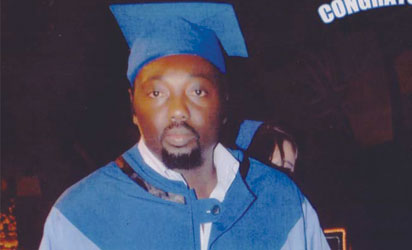 Enero Ukonga, a 34-year-old graduate of the University of Benin, had just returned home after completing his Masters in Business Administration ,MBA course in Turkey and was making an attempt to proceed for his PHD in the United States of America.

As he relaxed in his Opebi,Lagos family home, one Osaretin Enabulele , accompanied by four others identified as Elisha Jonah, Kazeem Ibrahim, Charles Timinnemi, a Medical student in Romania who was on holiday and the forth identified simply as Fred, came visiting.

The lead man, Enabulele , an importer who resides in Benin city, Edo state, was said to have informed Uknonga’s father on phone, that he was bringing the original copy of the bill of laden of a one by 40 feet container, to facilitate its clearance from the Apapa Port in Lagos. By the way, Ukonga’s father, a retired Customs officer, is a clearing and forwarding agent.

But that visit turned out to be the family’s nightmare, following the abdution of Ukonga by the visitors. Enabulele was said to have requested Ukonga to follow him to the car to get the document for his father who was then in Benin city .

But apprehension reportedly set it after Ukonga’s friend(names withheld) reportedly waited in vain for his return. Curiously, he stepped out of the house to look for him but did not see him nor either of the visitor.

But as he looked round, he reportedly stood still with his mouth agape in shock, on seeing Ukonga’s pair of slippers in a disarrayed manner. Sensing trouble, he reportedly put a call to Ukonga’s phone only to discover it was switched off. Thereafter, he contacted his father who was in Benin city, to inform him of the ugly development before reporting the matter at the area ‘F’ division.

The police reportedly swung into action but their effort proved abortive. Crime Guard gathered the case was transferred from area ‘’F ‘to the Special Anti Robbery Squad , SARS for further investigation. It was gathered that effort to reach the main suspect , Enabulele failed . Operatives were said to have travelled to the suspect’s home at 4, Ehigie street, off Aiaohan, Dumex road, Benin city, where his girlfriend and his brother were arrested but later released.

Preliminary investigation by operatives of SARS revealed that the main suspect had bolted to Ghana, following claims by some of his friends that he called them with a foreign number informing that he was in Ghana. But when the number was dialled, he reportedly did not pick his call. Investigation at SARS, lingered for six months without any headway.

DSS to the rescue

Determined to unearth the mystery surrounding his son’s whereabouts, Mr Benjamin further lodged a complaint with the Department of Security Service ,DSS. This action paid off, as one of the men who reportedly visited that fateful day was arrested in January 2015, six months after.
He is Elisha Jonah. Jonah as gathered, was arrested mid January, through Enero Ukuoga’s stolen Black Berry phone. The phone was said to have been traced to a user in Ikeja, Lagos. By the time the user was arrested, he told the DSS operatives that he bought it from a friend. At the end , it was discovered that five persons had used the phone, with the seller traced to Jonah .

During interrogation, the duo gave a starling disclosure of the whereabouts of the missing Ukonga . They revealed that he was dead and had been buried in a shallow grave at Abesan’s estate, Iyana Ipaja area of Lagos, close to Kazeem’s house.

When the cat was let out of the bag, Mr Ukuoga reportedly lost balance and slumped on one of the seats in the office of the DSS. By the time he came back, he reportedly gave a blank stare at the suspects , apparently trying to fathom their claim. When he managed to say a word, he reportedly started by asking amid tears “what on earth could have warranted such cruel act on an innocent person?

At this point, the DSS reportedly transferred the case to the Force Criminal Investigation Department headquarters annex in Alagbon, where operatives at the Homicide section reportedly led the suspects to the shallow grave in a bush at Iyana Ipaja, from where the body of Ukonga was exhumed.

To say that members of the family was devastated at the bizarre occurrence is to put it mildly, as words could not express the family’s mood .

Though the discovery plunged the family into a season of sorrow but it brought an end to the long search for their assumed missing son.

Asked what went wrong between Mr Benjamin Ukonga and the importer, Enabulele, who is still at large, the bereaved father explained, trying hard not to betray his emotion:

“ Enabulele was introduced to me by a family friend. Later, he contacted me in Benin, saying he had a one by 40 feet container to clear. We settled for N1.5 but he paid N1 million and we started processing the clearance. We paid the Customs duty and other necessary duties , remaining the shipping company which required the original bill of laden of the owner of the container.But to my surprise, he called, requesting for the refund of his money which was not possible because the job was 95% concluded.Later, he called to say he had the bill of laden and I told him to take it to my manager in Lagos. But because that day was a Saturday, my Manager asked him to drop the document at my house in Opebi. But we later discovered he had a sinister motive,following the adoption of my son. My son was never into clearing and forwarding. I was told he even suggested they waited till Monday to hand the document to my manager”.

We thought our son was drugged- mother

On her part, Mrs Ukonga cried uncontrollable as she spoke with this reporter. She started by saying that all the while her son was declared missing, she kept hoping he would walk in someday. But the recent revelation according to her has left her shattered.

Hear her: “This is an act of wickedness in the highest order. My son was an innocent and obedient person. He was never a troublesome fellow. We never believed Osaretin Enabulele could be this callous! Ah! This is so aching ….”, she paused to blow her nose. Through out the period we were searching for him, I concluded they could have drugged him and abandoned him far away and that he could have strayed in the process”, she paused again. But this time around, she broke down in tears at the mere thought that she would never leave to see her son again.

We didn’t kill him

But when the suspects were interrogated by operatives at Alagbon, they denied having a hand in Ukonga’s death. Kazeem according to police sources said:

“ We did not know how he died. On that day, Osareti Onabulele called Charles that he had a business deal in Ikeja and needed some help. Charles contacted Elisha who thereafter, contacted me. We went there, parked a Toyota Camry car owned by one of us, Elisha, who is Medical student in Romania , in front of the building. By the time Enero was bought out of his house into the car, Elisha was attending to an injury I sustained on the leg. When we got into the car, we discovered that he(Ukonga) was gasping”.

Asked how the body was buried in the shallow grave, the suspects alleged that Enabulele instructed them to bury him there, in order to avoid arrest.

As at Thursday, the whereabouts of Osareti Enabulele, the alleged mastermind, was still unknown. He was subsequently declared wanted. A gazette bulletin from the Force CID read:

“A warrant of arrest has been obtained from Magistrate Court, in Lagos state for his arrest. He is wanted for the offence of conspiracy and murder on the 19th July, 2014 at number 10, Ajanaku street off Salvation road, Opebi Lagos. “Method used in committing the offence is that the suspect with four others went to the above mentioned address, kidnapped the deceased , one Enero Ukonga and on their way to their destination, the deceased died on the road inside the vehicle” .

Part of the investigation as gathered, included a DNA test on the body , with a view to ascertaining whether it is that of Ukonga. The outcome of the result according to the Police would form their next line of investigation. The Police as gathered, have also written the shipping company not to release the container said to have been sent from Italy by one Kate Uwa, , until investigation is concluded.

The, FCIID, Public Relations Officer, Mr. Friday Achibong, who confirmed the incident, said Enabulele and others; Fred and Charles at large, had been declared wanted.