July 5, 2015 – Injustice: Nigerian Soldiers Attacked Youth Leader In Jos For Refusing To Give Them Money

See what some soldiers did to an innocment man in Jos on Friday….

The man simply identified as Pam went to the ATM to withdraw his rent money (N100,000).

He happened to be the only one who got money before the ATM broke down leaving others stranded including some military men on queue.

The military men later approached him and asked him to give them the 100,000 and come to their base the following morning to collect his money but the man refused because he needed the money to pay his overdue house rent.

So the military guys beat the hell out of him and collected the cash by force before fleeing the area.

The case was reported to STF Commander Major General Enete during a live program on FM 93.7 Jos. He said they should bring the wounded guy to his office and promised to take full care of the victim and refund his money.

Pam is currently being treated at Parkview Hospital. 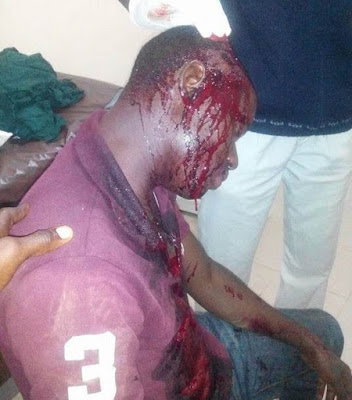 Some of these men in uniform are terrible.