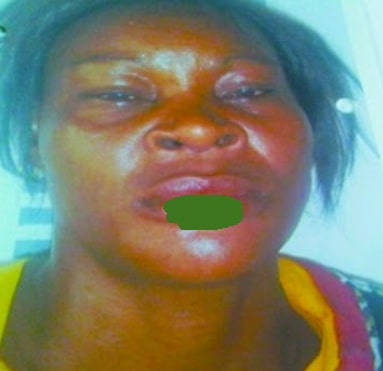 A middle age woman has been arrested for allegedly attacking her best friend in Ajao Estate Lagos.

The 32 year old mother of four simply identified as Ejiofor Chioma grabbed her victim Adam Joy Samuel and bite off her lip which fell on the ground during a public brawl.

The suspect accused the victim of spreading gossip to neighbours about her because her husband had relocated from Lagos to their village in Umuahia, Abia state.

Ada started bleeding profusely and was rushed to a hospital, while Chioma was arrested and taken to the Police Station at Ajao Division and later charged to court with wounding under the Criminal Code.

When she was arraigned, she pleaded not guilty and the presiding Magistrate, Mrs Y. R. Pinheiro granted Chioma bail in the sum of N20,000 with one surety in like sum..

The suspect has been remanded in prison custody.

Hehehehe the tigress woman deserves a spot in the military…. haba! this is too much