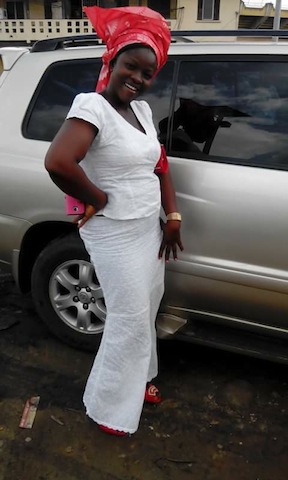 A 38-year-old housewife, Mrs Gbemisola Basorun has been reportedly abducted from her residence in Ikorodu, southwest Nigeria.

Gbemisola, mother of two and an HND graduate of Secretarial Administration, was abducted in front of her apartment at 5, Basorun Abimbola Street, Agodo-Alara via Odogunyan/Ikorodu on her way from an evening service on Tuesday.

According to eye witness accounts, the victim was returning from church in her private car, a Pathfinder SUV with registration number plate KTU 476 CM in company of her children when four unidentified men riding on a motorcycle blocked her car at the entrance of the building.

Gbemisola’s first child, seven-year-old Olamide, was about opening the gate for her mother when the gunmen alighted from the motorcycle and one of them pointed a gun at her and ordered her to the back seat where her five-year-old brother was seated.

The boy and his sister were later thrown out of the car by their assailants while two of the men sat with the woman and the other one took over the driver’s seat.
The motorcyclist and the car were said to have driven off together, leaving the children to their fate.

Abimbola Basorun, Gbemisola’s husband said one of his neighbours put a distress call across to him around 8pm and he quickly alerted the police both at Sagamu road, Ikorodu and Ogijo Police Divisions, Ogun State who later recovered the car the following day but his wife’s whereabouts remain unknown.

“I was not around when the incident occurred but the police are aware about the development and they have swung into action,” he said.

Pastor of Christ Apostolic Church, CAC, Pentecostal Chapel where Gbemisola is a Prayer Warrior, Pastor I.T, Ariyo said she is a committed member of the church.

“She is in Prayer band and Welfare departments and I saw her last during the Tuesday service,” Ariyo noted.

Also, Gbemisola was said to be ill and on medical treatment before her abduction.