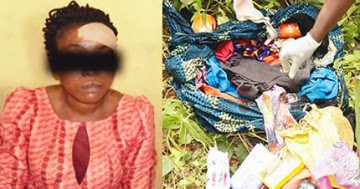 Pictured above is a very lucky woman who escaped from the den of ritual killers in Unity & Peace Estate, Ota area of Ogun state this week.

The 28-year-old woman said she was lured to the place by her boyfriend.

She said her lover promised her a deal worth N1.5million but on getting to the place, they met another man who joined her supposed lover to beat her up. She was blindfolded, bound hand and feet and left in the dungeon littered with dead bodies and bones of previous victims.

The men left and the lady managed to roll towards the entrance of the building.

She said passersby in the area who saw her came to her rescue.

This is what the lady told policemen from the Itele Station who were later invited to the ritual killer scene.

“I met one of the ritual killers about two weeks ago and we started a relationship. The guy told me that he was a contractor and promised to link me up with people who would give me juicy contracts.

“The man called me two days ago and told me about a contract worth about N1.5m, but I could not meet him because I was sick. The man later came to my residence in Lagos and still persuaded me to come for the deal.

“On getting to the Unity and Peace Estate, we headed for an uncompleted building. One other person joined us. When we got to the building, I saw that the house had been plastered and the floor had been cemented.

“But both of them pounced on me, beat me up and attempted to rape me. I was having my monthly flow and that dissuaded them.

“They then tied my hands and legs, blindfolded and gagged me. They promised to come back at night to complete their assignment. It was a miracle that passers-by rescued me.”

Police said they found 2 decomposing bodies and human skeletons in the place.