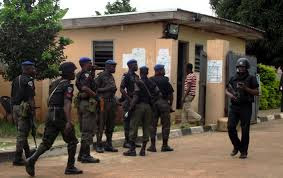 According to eyewitnesses, 4 masked gunmen invaded two private hospitals in Okitipupa around 10:30pm on Sunday and on Monday around 11:15pm.

Medical workers and patients on admission were severely beaten and robbed of their valuables in the separate attacks carried out 24 hours apart.

This is what an eyewitness said:

“The thugs were four in number and wore masks. They came to the hospital on motorcycles. They threatened to shoot whoever did not cooperate with them. So, all of us lied down and allowed them to do their operation without any hindrance.

“They were asking everybody, including the patients, to bring out money. Those who did not have money to give them were serious beaten. It was very unfortunate. We tried all our efforts to call the police but we did not succeed because they also collected our phones and other valuables” .