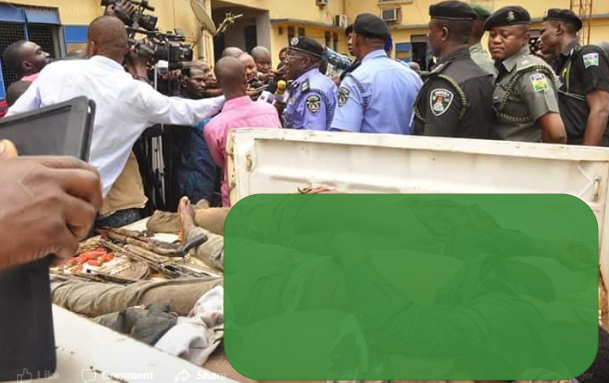 Edo state Governor Godwin Obaseki has commended the gallantry of men of the Edo State Police Command, who foiled a robbery attack on a bank in Igarra, in Akoko Edo Local Government Area of Edo State.

Obaseki expressed regret over the death of some persons while the attack lasted and prayed for the repose of their souls.

He said those that were wounded would be treated and assured that the state government is working assiduously to rid the state of criminal elements, through vigorous synergy with the various security agencies in the state.

“The attack is unfortunate and we will do all within our power to forestall such heinous incidents in the future,” the governor said.

He said the bravery of men of the state police command is an evidence of the ongoing reforms and synergy between the state government and the hierarchy of the Police.

The Edo State Commissioner of Police, Mr. Johnson Kokumo, said that the attack was foiled by the combined force of Policemen, who were on guard duty at the two banks in the vicinity, noting that three of the armed robbers were killed during a gun duel.

While parading the bodies of the dead criminals at the State Police Headquarters, in Benin City, on Friday, he said that two civilians and a Police Inspector were killed, when members of the gang staged a simultaneous attack at the nearest Police station in the area.

According to him, “The attack on the bank in Igarra was on Keystone Bank, and not on two banks.

“Actually, there are two banks in the vicinity, and adjacent to each other. One is keystone Bank, the second is Unity Bank. The marauding criminals actually attacked Keystone Bank, but they met with very stiff opposition from Policemen who were on duty at Unity Bank and Keystone Bank. They were men of the Nigeria Police Mobile Force (MOPOL 60), Edo State,” Kokumo said.

“They were able to give a very good account of the stuff they are made of in a gun duel that ensued between the criminals and the policemen who were on bank guard duty. Three of the criminals were gunned down. Here you see them with their operational weapons recovered,” he added.

On reports that the criminals attacked a police station in Igarra, he said, “Criminals will always evolve different means of perpetuating their acts. What this gang of criminals did was to divide themselves into two halves. One of them had gone to the Police station ostensibly to prevent the Police from responding to possible distress call from the bank when the attack would have been wrecked on the bank. The second half went to Keystone Bank for the attack.

“The moment the distress call went to the Police station, there was no way the Policemen at the station could hasten down to prevent them. The ones at the Police station were the ones that wreaked the havoc, killing two civilians and one Police inspector. I would regard that as the minus of the operation, but on the whole, it is sad that we lost an inspector of Police to this criminal gang. Three of the armed robbers were gunned down,” the police commissioner said. 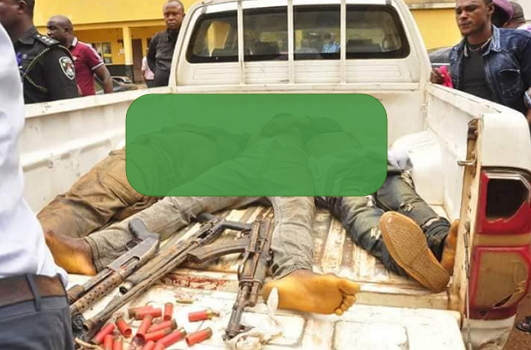 He denied claims that some persons lost their lives at the bank premises, noting, “After the encounter, two of the armed robbers were actually dead. The third one was not dead as at the time the Police swooped on them; he was able to give us useful information that we are processing with a view to apprehending others who have taken to flight.”