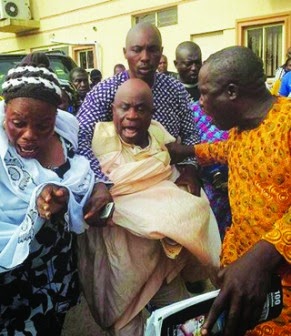 PDP campaign co-ordinators drawn from the 236 wards across Ogun State, western Nigeria, on Wednesday beat up the South W est Zonal Secretary of the party, Chief Pegba Otemolu, for refusing to share the money allegedly given to them by President Goodluck Jonathan.

Some of the state campaign coordinators went berserk following the failure of Alhaji Fatai Adeyanju, the National Auditor of the party and Chief Pegba Otemolu to release the fund allegedly meant for the state co-ordinators engaged for President Goodluck Jonathan’s re-election.

Our correspondent gathered that a 5-hour meeting held at a hotel on Quarry Road in Abeokuta, the state capital, to sensitise all the 708 Co-ordinators drawn from the 236 wards across the state, ended in a shouting match which resulted in the attack on the national officers of the party. 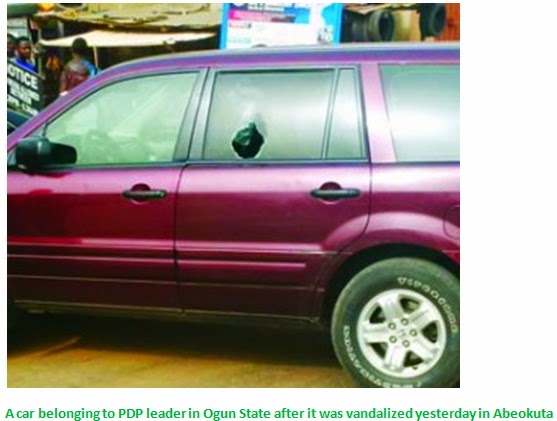 Sources at the meeting told P.M.NEWS that trouble started when the National Auditor of the party, during the course of the meeting, told the coordinators that the fund meant for them was not available at the meeting.

One of the co-coordinators, who pleaded anonymity, told our correspondent that Adeyanju informed them that the money had not been deposited in the designated account, when they knew he was lying.

The co-coordinators consequently held the two party leaders hostage and insisted that they would not allow them to go until they release the fund meant for them.

The two party leaders were held hostage for hours after which some political thugs escorted Otemolu out of the hall and he quickly entered his waiting Honda Pilot SUV.

But an attempt by the driver to whisk away his boss resulted in an accident which left one of the coordinators from Sagamu seriously injured.

The injured man is currently being treated in an undisclosed hospital in Abeokuta.

The incident sparked off anger as the other aggrieved co-ordinators pounced on Otemolu and bundled him out of his car which had hit the median and hit another parked car on the other side of the road.

Adeyanju took to his heels when he saw Otemolu being roughened up along with other leaders by the aggrieved co-ordinators and other party members.

When our correspondent contacted the State Secretary of the party, Chief Semiu Sodipo, he declared that nothing like that happened, but declined to speak further.