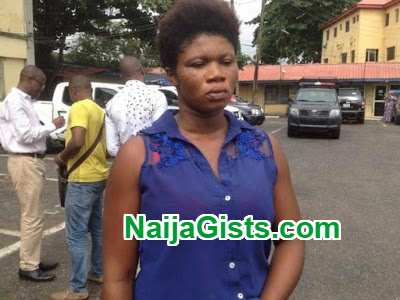 Miss Ifunaya Eme, a 31-year-old single mother of three has been arrested for allegedly abandoning her day-old baby on the roadside after delivery.

The suspect told police she abandoned the baby girl because her father rejected  her when she was pregnant.

She said she had 3 children for her first husband but left them with her sister in Enugu and relocated to Lagos for a better life. Eme gave birth to the baby girl around 1am on Monday and dumped her by the house gate before heading to bed.

Area residents of Prince Bello street in Ajangbadi area of Ojo Lagos informed the police about the incident.

The baby girl is currently in intensive care while her mother laments in police detention.

The now mother of four reportedly blamed the current economic recession for her wicked act.