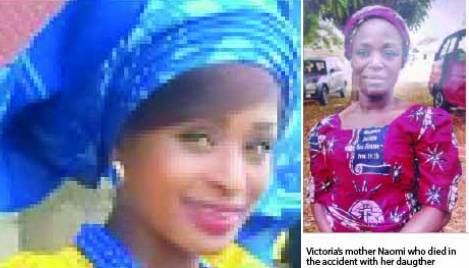 The death of Victoria Hallan, an indigene of Toro Local Government Area of Bauchi State in an auto accident on Wednesday October 12, 2016, just four days to her wedding has turned the mood of her family and friends from rejoicing and singing to deep mourning and sober reflection on the uncertainty of life.

The sadness that enveloped the atmosphere following the news of Victoria’s death swings from anguish to a state of despair as it was learnt that she died along with her beloved mother in the ill-fated bus that was conveying them from Jalingo in Taraba State to Bauchi to put finishing touches to her wedding preparations. 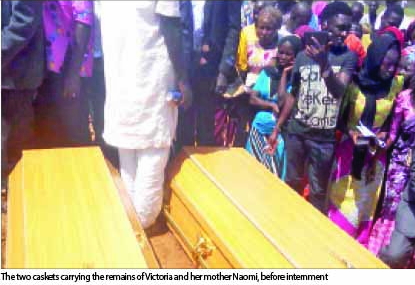 Victoria, a National Diploma graduate in Science Laboratory Technology from the Federal Polytechnic Bauchi, according to her friends who spoke fondly of her, was a beautiful person inside and outside.

She had a pointed nose, a big charming smile, elegance, carriage, and captivating eyes, they told Saturday Sun. She graduated in 2015 after which she and her fiancé, Aminchi David, 34, agreed to tie the nuptial knots.

They fixed Saturday October 15, 2016 for their wedding in Bauchi. Before that, Victoria’s send forth was slated for Sunday October 9 at Sabon Gari in Jalingo.

“I can’t believe that my jewel is gone,” Aminchi decked in his blue wedding suit with his best man Armstrong decked in suit with same colour and suit, told Saturday Sun after Victoria’s funeral, as he fought back tears.

“She was a paragon of beauty. I can’t believe she is dead. She was so kind and organised. It is so painful,” Aminchi counted his loss.

Friends recalled that the late Victoria, 24 and her mother, Naomi, 50 cut a picture of happiness during the send forth. As other family members and friends shared in their happiness, there was no premonition that mother and daughter were destined to die same day and place in one of the most painful deaths one can imagine.

“She was enjoying one of the happiest days of her life,” one of her blossom friends told our correspondent of Victoria’s disposition during the send forth. Sadly, it was to be Victoria’s last happy moment in life as death came calling after the ceremony

“It is painful,” the friend broke down and cried profusely. “She looked ravishing in her yellow colour lace with blue headgear to match. Victoria was gap-toothed and when she smiled it was so beautiful,” said her childhood friend who has not stopped crying.
“Victoria’s chief bridesmaid Joan Joshua fell ill when the news reached her that her best friend had died in a motor accident,” Armstrong said.

After four years of courtship, the intending couple agreed for the wedding to take place at COCIN church in Tudun Maizamani on Bayara road in Bauchi metropolis.