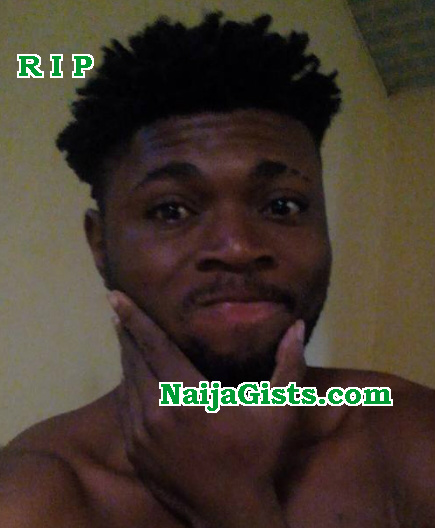 A randy mobile phone software marketer, who specialises in downloading applications on mobile sets, has been reportedly found dead in a hotel room in Ovwian, Udu Council area of Delta State after allegedly demanding sex from a female customer who could not pay for the service he rendered to her.

The deceased identified as Nelson Eni Millz operating at a popular Robinson Plaza along Deco road in Warri South was said to have demanded that the female customer ‘pays in kind’ since she could not pay the entire fee.

Southern City News gathered that the incident happened last week Thursday at Treasure Land Hotel in Ovwian where the victim had lodged with the supposed lover identified as Helen Obiogu.

Conflicting reports had it that the victim (Nelson) slumped and died while having rounds of sex with Helen, but another account had it that he died from poisoning.

A source at the popular Robinson Plaza, where the lady suspect had gone to purchase the mobile phone told our correspondent that Helen was at the phone plaza last week Wednesday to buy a handset and to download music and applications, but was left with N5,000 after buying the phone.

It was gathered that Helen, who is now in police custody, pleaded with the late Nelson to let her go and come back another day to complete the payment but he had refused and insisted she met him in a hotel.

Nelson, in his late 20s, left behind two kids.

When Southern City News discreetly visited the hotel as a lodger, staff and sympathizers were seen discussing the unfortunate incident.

A staff at Treasure Land Hotel told our correspondent that the lady suspect had almost fled from the hotel when she was arrested by the hotel security guards on duty.

The security guards had noticed that she was crying and was in a haste to leave the premises in the early hours of last week Thursday.

The State Police Public Relations Officer, Celestina Kalu, confirmed the development to our correspondent when contacted.

Kalu, in an additional message to our correspondent, said, “It was a sudden and unnatural death. Be informed that on 13/10/2016 at about 15.30 hours, one Gordon Tone (the manager) of Treasure Land Hotel, reported that one Nelson (male) surname unknown, lodged in his hotel along with his female friend by name Helen Obiogu of Ovwian Town.

“The said Nelson was found dead in his hotel room by 14.55hours. We visited the scene of crime and no mark of violence seen. The corpse has been removed and deposited at Noble Hospital mortuary for autopsy and the said female friend, Helen Obiogu of Ovwian town, has been arrested and detained.”

Continue Reading
You may also like...
Related Topics:delta state, thunderbolt

Photos: Nigerian Lady Who Died In Car Accident 4 Days To Wedding Buried On Her Wedding Day
Chibok Girl Gets 100 Strokes Of Cane For Refusing To Marry Boko Haram Fighter