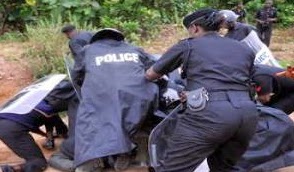 May 5, 2015 – Pictures: Married Nigerian Police Officers Killed Each Other Over Girlfriend, Recharge Card Seller In Abuja

Two lover men in police uniform have committed double murder over a girlfriend they both shared Abuja.

According to area residents, a police inspector and a corporal reportedly shared a very beautiful recharge card seller in Karu town but the relationship ended in disaster last week when the corporal who claimed to have spent a lot on the homeless girl identified as Chidinma saw his senior colleague chatting with the lady.

Out of anger, he pulled the trigger and killed the card seller and the inspector before taking his own life.

Sources claimed that the two men in uniform are married with children.

See wetin the thing down there is causing. So pathetic!!!