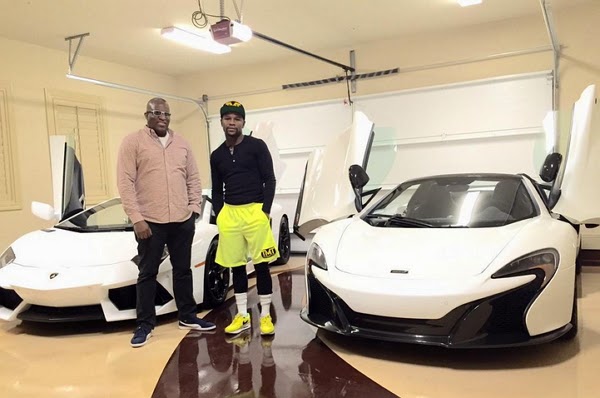 His success started sometimes in 2013 when undefeated heavy weight champion Floyd Mayweather gave him a call around 3 a.m.

Mayweather told him to have a Bugatti Veyron sitting in the driveway of his Las Vegas mansion in about 12 hours. 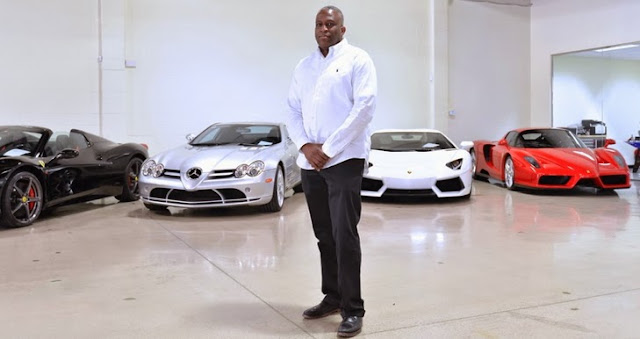 Mr Okeke said he knew then it was time for him to perform a major miracle in his career so he jumped in his shower and headed for his store, Fusion Luxury Motors in Chatsworth California.

He checked his suppliers and picked the Bugatti and drove it to Mayweather’s home himself.

The turn around time was around 11 hours, beating the boxer’s expectation by 1 hour.

Obi Okeke said that is life when you are dealing with highly spontaneous Mayweather.

Okeke has sold 39 cars to Mayweather including 3 Bugatti Veyrons valued at $6.2 million and a $3.2M Ferrari Enzo.

He has also sold luxury cars to Chris Tucker, Ellen DeGeneres, Jessica Simpson and others.

His automotive career started in 1987 as a Chevrolet dealer and eventually moved on to manage stores for Ferrari, Maserati, Lexus, Mercedes-Benz before starting out on his own.

In a recent chat with Automotive News, Okeke talked about his life and how he met Mayweather.

A: I was not. My father is from Nigeria; my mother is from Ohio. I was born in Nigeria. My parents have been married for 57 years. When I was a kid, Nigeria had a civil war, so we escaped from Nigeria as refugees [to Ohio], just my mom and the kids. Then we went back to Nigeria. My parents weren’t crazy about the school system. My mom’s best friend was in charge of Swissair for western Africa, so they shipped me off to Switzerland. 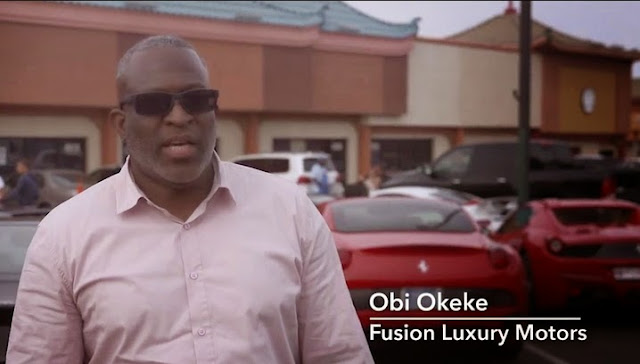 When did you first meet Floyd?

How has your approach to the business changed over the years from working at a Chevy dealership to now?

My parents sent me to school in Switzerland as a young child, so I’ve always been very close to the European cars. And that’s why I was with Volkswagen. I tried to get a job at BMW and Mercedes, but nobody would hire me in L.A., so I just took a job with Lexus. And then from Lexus to BMW, Mercedes, Ferrari, Maserati.

How has it changed? I focus a lot more on customer service. My focus is taking care of the client because when you go to a dealership to acquire a car, it’s basically they want you in and they want you out. It’s a numbers game. I like to focus time on taking care of the clients and spending time with the clients. And trying to do events that may be worth their while, or something that might be engaging to them. That’s how I view it.

With Floyd, I saw that he called you and said he wanted a Bugatti in 12 hours. That sounds like an impossible task.

He called me at 3 in the morning. This was Bugatti No. 2. The second Bugatti I sold him, and he wanted it in 12 hours. This was approximately a year ago [in the lead-up to the first Marcos Maidana fight] because he wanted the car to drive to the gym that day. He wanted a different Bugatti to drive to the gym.

When he called you at 3 a.m., what was running through your head?

I was just getting accustomed to receiving calls from him in the middle of the night for the past six weeks. When he called me in the middle of the night, I would just basically keep the phone on. That particular night, when he called me, my wife was like, “Oh, my God, honey, who is this calling you?” I picked up the call, walked downstairs as I’m talking to him, and he told me he wanted a car in his driveway in 12 hours.

I was a little foggy, obviously, I was in a deep sleep. So first thing I did was I hopped in the shower. You gotta wake yourself up. Got dressed, then I went to my office. I got to my office around 4:45, 5 in the morning. … Once I hung up with him, I’m just thinking of a strategy of how I’m going to get him this car in that time frame. …

I knew where there were a few cars. I said, well, I need to hop on a plane. I think I took a 7:30 flight out in the morning. I went to a destination that was closest to him that I felt I could get the car to him. When I got there, they weren’t open yet. So I went to IHOP, got some breakfast, then I went there and said I want to buy this Bugatti. They thought that I wasn’t serious. I called my partner, wired the money. Then the problem was trying to get a truck to flatbed it to his home. That was the biggest problem. The biggest hiccup was trying to find a specialized flatbed. When I called him, I said, “Champ, the problem is going to be getting the car to your house on a flatbed.” He goes, “I don’t care; just drive it to me.” I won’t tell you where I was, so I hit the road, and I drove it to him. That’s how I got it to him. …

On Bugatti No. 3, he called me at around 4:30 in the afternoon, and he wanted that car at his place by midnight. That was feasible because that car was in the L.A. area.

Is that just the life of a luxury exotic-car dealer?

My rule with Floyd is one hour. Floyd will call me and say, “I’m on my way.” He’ll call me at midnight, 12:30, 1, 2 in the morning and say, “I’m on my way.” That means he’s on his way to my dealership. The only thing I ask of him is just give me one hour because I’ve got to get up and get ready and head to the dealership. My dealership is about 45 minutes from my house. He will call me in Las Vegas, sitting on his jet about to take off, and tell me he’s on his way. It takes him about 45 minutes to get to L.A. from Vegas. I try to give him service that nobody else will provide.

Do you think he’s trying to challenge you?

We’re in a restaurant at 12:30 at night in Vegas, and we’re just sitting there hanging out. He tells the guy to go to my car and get a bag. They get a bag, he goes to the bathroom, he runs out of the bathroom, out of the restaurant and just keeps running! It’s his security detail’s job to realize he’s going jogging [and] to hop in their cars and follow him for 7 miles! It’s incredible.

I’m at the Wynn resort in Vegas. He calls me at 12:30 [after] midnight, and Vegas is on fire. He says, “Obi, what are you doing?” I say I’m just hanging out. He says, “OK, why don’t you come meet me at Fatburger?” I go to Fatburger on the strip, and I hang out with him at Fatburger. From there, we go to his house. We’re hanging out at his house. Then these bags start moving around. I said, “Floyd what are we doing?” He said, “Let’s go to the gym.”

At 3:30 in the morning, he starts heading to the gym. He spars for one hour, killing these sparring partners. And then he runs out of the gym and starts running for 7 miles. I have him on video. He doesn’t care what time it is. If he feels the need to do what he wants to do to workout and train, he’s going to do it. I don’t know if he challenges me or if I’m just in this environment of his and this is just how he operates. It keeps me on my toes. It makes me want to work harder. It makes me think out of the box. I push myself harder. I take it all in stride, and I appreciate the opportunity. I make sure that I do whatever I can possibly do to meet and fulfill his needs and his demands. I view it as a blessing.

Naija gets brain…kudos to him.