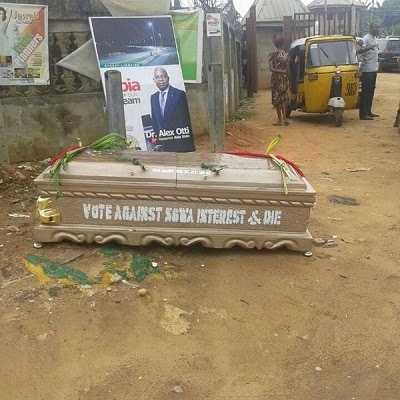 Preparations for tomorrow’s Abia State governorship re-run took a dangerous dimension yesterday when residents of the commercial city of Aba woke up to the gory sights of coffins placed at strategic points.

It was gathered that in the odd hours of yesterday, some people deposited caskets tied around with palm fronds and reminiscent of the death threat Ndigbo got in Lagos before the April 11 governorship poll, warning the electorate in Aba that they would die if they vote against Ngwa interest.

The coffins, placed in more than six strategic points, had inscriptions: “Vote against Ngwa interest and die”.

On one of the coffins deposited at Asa Road by the Post Office, the group threatened to bring back kidnapping and insecurity in the commercial town in a more horrifying manner if their candidate was not voted for.

The incident elicited condemnation among Aba residents who have called on security agencies to ensure that those behind such unruly threat were arrested even as they maintained that no amount of intimidation would make them go against the wish of any candidate of their choice especially in this democratic dispensation.

Some residents roundly condemned the act, saying that such practice was not in the habit, norm, tradition and attitude of the Igbo nation to parade coffin for whatever reason.

Meanwhile, the Dr. Alex Otti Campaign Organization (AOCO) has said it views the development as a despicable and barbaric act by desperate and frustrated politicians who have failed woefully in their bid to rig themselves into power.

According to its Director-General, Tony Enwereuzo, the shameful act was designed to discourage the supporters of the All Progressives Grand Alliance (APGA) from coming out to vote for Otti.

He urged the electorate to disregard the empty threat and come out tomorrow en masse to vote for the candidate of their choice as adequate security had been provided for them.

Also speaking over the incident, the spokesman of the Peoples Democratic Party (PDP), Chief Uchechi Ogbuka, condemned the development and exonerated his party from the despicable act.