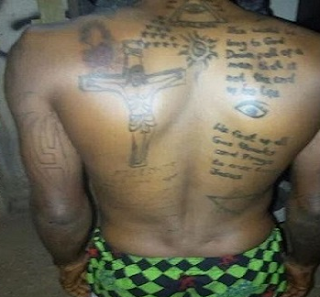 A suspected internet fraudster who became insane after a failed money ritual has attacked the wife of a prophet conducting deliverance for him.

The unidentified boy who engaged in Sakawa (term used to describe money rituals and those who engage in it in Ghana) reportedly ran mad after he refused to sleep with a mad woman as commanded by the native doctor performing ritual for him.

His family soon rushed him to Jesus Power House Ministry in Akatsi area of Volta in Ghana for deliverance.

However, on getting to the church founded by Prophet Agya Daadie, they were told he wasn’t around.

So while those who brought the mentally unstable boy to Prophet Daadie’s church were trying to schedule an appointment, the boy suddenly stabbed one of the wives of the prophet, 26-year-old Regina Asante on the shoulder.

The prophet on the other hand refused to report the case to the police because he believes he has the power to heal the boy of insanity.

This is what Daadie told Enter Ghana:

See the victim in the pool of her own blood below 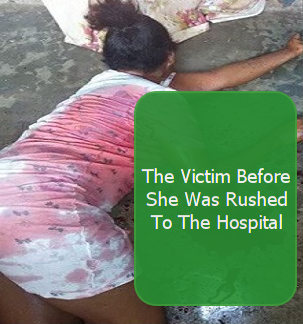