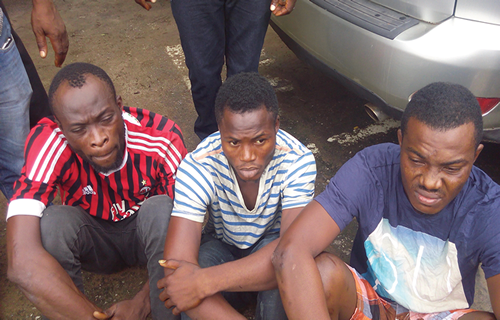 “We advise passengers to be extra careful when boarding commercial buses. One can never tell who is sitting beside him or her in a commercial bus or tricycle.”

The suspects are Terry Omotolu, 24, Kodra Akinde, 22 and Olalekan Mohammed. They were arrested on August 19, 2019, at Mile 2, Lagos. During operation, Omotolu used to act as passenger, Akinde as the bus conductor, while Mohammed, 35, would be the bus driver. Revealing their modus operandi, the suspects said they used to pick passengers along any route in the metropolis. Once other passengers are boarding, Omotolu would join them.

If it’s phone, they sell and share the money. They were arrested after a passenger, suspecting their game, alerted the police. Mohammed said: “I initially didn’t know Omotolu and Akinde were stealing from our passengers. Omotolu is just my conductor.

I always use him because he’s ready and willing to work. I became suspicious after I noticed that Akinde was a regular passenger. Whenever he boards, they would start discussing. It was three months ago I discovered their game. It was after I confronted them, that they involved me. We started sharing the proceeds together.”

Omotolu said: “I have been in the business for about a year now. Yes, I have never been caught until the Mile 2 incident. It was that incident that brought me to police station. I tried to pick the pocket of a passenger, but he discovered and alerted the police.” He further said: “Picking peoples’ pockets is bad, but man must survive.