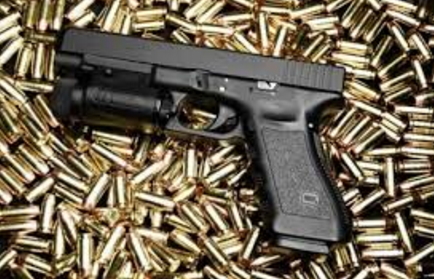 July 21, 2016 – Pistol & Bullets Imported Into Lagos Nigeria From US Intercepted At Tincan Island

Bashar made the disclosure at a news conference in Lagos.

“This will assist the Customs in further investigation because the pistol is six-round reversal type which is dangerous.

“Customs would have handed it over to the Police but the vehicles arrived on Saturday July 16 at Five Star Logistics, while the terminal operators alerted Customs officers immediately they discovered the pistol in the vehicle,’’ the News Agency of Nigeria 9NAN0 quotes Bashar as saying.

He said that the vehicles were imported from the U.S.

Photos: Man & Wife Pose As Tinubu & Daughter To Defraud Man Of N70Million & Another Of N15M
5 Kidnappers Jailed For 50 Years In Sapele Delta State Over Abduction Of 70-Year-Old Trader