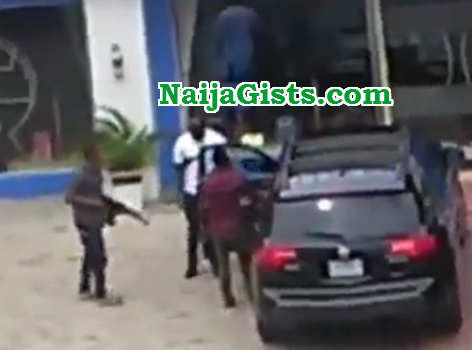 Some suspected robbers on Saturday evening engaged policemen in a gun battle, after a successful robbery operation in Port Harcourt, Rivers State.

The armed men number­ing about four, robbed a supermarket situated along Sangana Street, in the state capital, and carted away an unspecified amount of cash, phones and other valuables.

According to eyewit­nesses, the four gunmen, car­ried out the operation about 5:25pm, unchallenged. They said what attracted the at­tention of two policemen, in mufti, was the alarm raised by one of the salesgirls.

One of the sources said a gun duel ensued, caus­ing people in the vicinity to scamper for safety.

He said the shoot-out last­ed for about 15 minutes. He expressed surprise that not­withstanding the policemen’s shots on target, no bullet hit any of the robbers, as they escaped through the railway axis.

Sunday Sun learnt from one of the salesgirls, who was in shock, that they were robbed at gunpoint.

“As I was counting the money, they came in, and one of them pointed a gun at me and took the bag contain­ing the money,” she sobbed.

A fashion designer’s shop located at the end of the street was riddled with bul­lets, during the exchange of gunfire between the police­men and robbers.