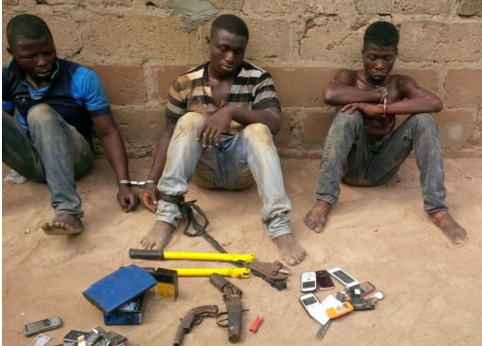 3 members of a notorious robbery gang identified as Yusuf Olohuntoba, Abiola Yekini and Tope Oyeleye were arrested on Monday in Agbado area of Ogun State while fighting over the sharing formula of their robbery loot.

The suspects had robbed some houses in Owonikoko and Ayinla areas around 2am on Monday, stealing money and phones, among other household items. They were said to have converged on a street in Ayinla to share their loot when an argument ensued among them over the sharing formular.

On sighting the robbers, a source in the area called the police who mobilised to the area and arrested them.

4 other members of the robbery gang are still at large.

Police recovered 16 phones, 2 guns and a DVD player from the suspects.

Photo: Security Guards Arrested For Burning Down Master’s House In Ajah Lagos
Photo: Teacher Arrested For Killing 3-Year-Old Girl In Lagos By Forcing Her To Seat On Hot Water