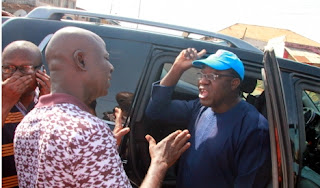 We, Oodua Foundation, are a think-tank organization of academics and professionals from within the 45 million people of the Yoruba Nation of Southwestern Nigeria. We are resident in countries across the world, and our headquarters is in the state of Delaware, USA.

We hereby alert the world about the beginning of a reign of violence in our Yoruba homeland in the Southwestern Region of Nigeria. The attention of the whole world has been focused on Nigeria since April because of the terrorist organization, Boko Haram, its devastations of the Northeastern Region of Nigeria, and particularly its abduction and enslavement of nearly 300 schoolgirls. Leading countries of the world are already engaged in helping Nigeria to find and liberate the girls.

But even while this horrible situation in the Nigerian Northeast continues, there is now being provoked in the Southwestern Region of Nigeria an outbreak of violent uprisings that could soon call for bigger interventions of the international community.

According to various reports, federal Mobile Police shot teargas and guns into a large crowd of unarmed citizens who were carrying on a peaceful rally for their political party, APC, in Ado-Ekiti, capital city of Ekiti State, Saturday, June 7. One APC member is reported to have died of a gunshot to the head, while some others were wounded, and some vehicles were damaged.

The background to it all is that a gubernatorial election is due in Ekiti State on June 21. APC is the main party opposing President Jonathan’s party, PDP, in Ekiti State. The incumbent governor, Kayode Fayemi, belongs to the APC. Fayemi had won the Ekiti gubernatorial election in 2007, but had been declared the loser by the National Electoral Commission, and the PDP candidate was declared winner. Fayemi fought for three years in court and got the verdict reversed.

In recent months, Ekiti APC members in particular and Ekiti citizenry, in general, have become extremely nervous about stated PDP determination to use federal power again to rig this year’s election. Recent changes in personnel of certain federal agencies (such as the Electoral Commission and the federal police) follow the same pattern that had facilitated the 2007 rigging. It is common knowledge that the Electoral Commission and the Police commonly help to rig elections in various parts of Nigeria for the benefit of the persons in control of the Federal Government. Most Ekiti people fear that any attempt to rig the gubernatorial election this time will cause far too much violence in their state. A similar situation obtains next door in the state of Osun where another governor, Rauf Aregbesola, who again eventually secured his electoral mandate through court actions, is also up for reelection in August.

In the light of the growing probability of violent conflicts in these states, we of Oodua Foundation issued a statement urging President Jonathan to ensure that the elections will be free, fair and peaceful. (A copy of the statement, which was advertised in Nigerian newspapers, is attached to this Press Release).

A delegation of Oodua Foundation visited the office of the Chairman of the United States Senate Subcommittee on African Affairs, Senator Chris Coons, on May 23, 2014. The delegation raised this matter among others, and urged that the international community should dissuade President Jonathan from doing anything that would start a new area of major violence —– in Southwestern Nigeria.

The police attack on a citizens’ rally in Ado-Ekiti, and the killing of an Ado-Ekiti citizen, appear to have now set the stage for the massive violence that we of Oodua Foundation had warned against. But it is not too late for members of the international community to persuade President Jonathan to change course and opt for free, fair and peaceful election in Ekiti State, as well as elsewhere.

Ekiti State is part of our homeland in Nigeria. We do not want to see any State become the scene of great conflicts, killings and destruction, or the destination of international peacekeeping forces. Whereas the Oodua Foundation is decidedly non-partisan, it cannot afford to ignore any acts by any party that would substitute the BULLET for the BALLOT in what is officially a democratic dispensation.

We insist that Yoruba politicians are culturally able to compete decently and peacefully among themselves in any election, and then rally around the winner for the good of their people. As in other parts of Nigeria, the corrupt hands of the persons in control of the Nigerian Federal Government are the hands that can generate crookedness and violent conflicts in these coming elections, especially in Ekiti State. They should be stopped.

Only A Selfish Goodluck Jonathan Will Run For 2015 Reelection, He Has Failed Nigerians By Kenny
An Open Letter To Kano’s Emir Sanusi Lamido “Why Imprison Ur Intellect In A Palace”