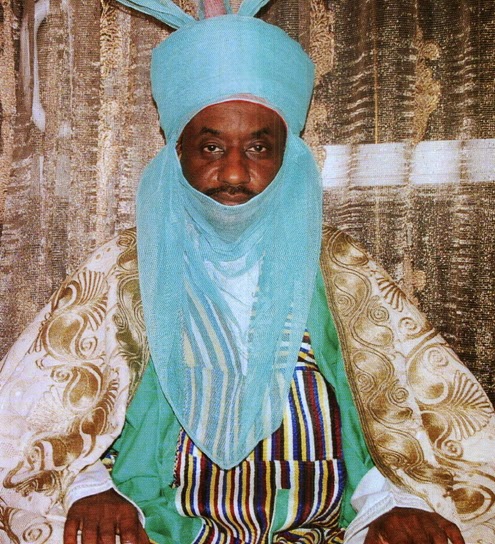 June 14, 2014 – An Open Letter To Kano’s Emir Sanusi Lamido “Why Imprison Ur Intellect In A Palace”

I must begin by exhibiting a needless sycophancy, as it is with our people, when another person attains a status no longer wise to antagonise: I am a fan.

I am, however, a very critical fan of yours as a public intellectual and public servant. Unlike others who praise you as the best thing since Aristotle, my appreciation of your public engagement has been with both applause and frowns. Of the latter reaction, my major publicly declared disagreement with you was in the fuel subsidy debate. I have to reproduce what I wrote about you even during the period running up to your dismissal from the Central Bank. I hasten to do this before your praise-singers report me as a hypocrite:

‘In many quarters, Sanusi’s stance during the fuel subsidy removal protests, especially his reckless remark that “Those speaking now on the internet and Facebook and Twitter and newspapers are not workers but middle-class elite who use PMS in their smart cars…”, is a reason to not pity him. We were in the streets in January, 2012 to convince the government that its predecessors have built a socially disastrous system in which living without subsidy is a harsher hell, and he insulted our sensibility with elitist excuse that the masses are not affected by the removal, refusing to understand that the masses mostly depend on generator sets for electricity, refusing to understand that a rise in the price of fuel is a rise in the cost of transportation, and this means a rise in the cost of everything: an inevitable inflation.”

Fuel subsidy, thankfully, is not the inspiration for this letter. This letter is simply to address a habit of yours that a critic has termed as an “arbitrary showmanship”, and to warn you of the people whose friendship is enough to get your “Dogarai” consistently on alert, for their unrestrained identification with you is a multiplication of troubles!

I’ve followed your intellectual activism despite the marked contradiction in your advocacy of the new Nigeria: sometimes you’re unifying as a pan-Nigerian rebel against ethno-religious propaganda, other times you’re polarising as a hardcore preacher of Hausa-Fulani aristocracy. In most of your campaigns to highlight your ethnic pride, you came out, perhaps unwittingly, as a promoter of ethnic supremacy. Your public intellection is dazzling not only because of your multi-disciplinary erudition, but your uncommon use of language makes you my second favourite wordsmith from the emirate now under you, that is, just after the incomparable Professor Ibrahim Bello-Kano.

I had wanted to be indifferent to your emergence as Emir, as the affairs of the Kano Emirate are none of the business of a subject of Emir Umar Bago Tagida III of Lapai Emirate. This was before a friend wrote to remind me that I was actually the winner with you as custodian of the traditions and culture of a people whose religion, number and influence are determinants of the socio-political stability of the country; that as a “progressive Muslim”, as he thought I too am, who had challenged the reverent Sheikh Ja’afar of blessed memory who, in a burst of your usual arbitrary impulse, you once called “a glorified almajiri”, you have finally found a platform to influence both the conservative northern Nigeria and conservative Islam without being dismissed as a non-member of our cultural establishment. I thought less of this because the Nigerian monarchy has always been the retirement heaven of our privileged technocrats and intellectuals, and none has ever championed a remarkable cultural revolution.

Some critics who think your decision to offer yourself up for imprisonment in a palace instead of a future in public service and then politics is unreasonable do not know that you have declared that your “all-time favourite philosopher is David Hume”, the Scotsman who taught you the essence of sentiments, and that reason is actually a misinterpretation of our sentiments. The critics reveal their own sentiments in their conclusion that the throne, on which you’d be until you shake hands with mortality, is a wrong choice for you, a potential occupant of even Aso Rock!

My fears for you, your royal highness, are enormous. The first has to be my disapproval of the skewed commentaries of your rabble-rousing friends, especially the lousy political drama queens, including the diminutive one who has asked your opponents to “…go jump into the lagoon.” Such petty partisanship isn’t just disquieting; it’s a desecration of your status. For the Emir is an open door, a pacifist, a leader of both the obedient and the rebellious subjects, and also the ruling and the opposition parties. Beware of your old friends who regard you still as that impulsive showman of “Mrs Yaro” scandal.

I read that the Presidency has continued in its witch-hunt designed to frustrate and embarrass you, seemingly insensitive to your new status. As a mentee of dead philosophers, you really don’t need to be told to not react to their attempts to desecrate your office. Be the victim, not the anti-hero they seek. I see their actions as a ploy to destabilise the emirate, as they had attempted with publications of congratulatory messages to their preferred emir, and now in their invigorated campaign to portray you as a corrupt bedfellow on the run. Your luck, we all know, is the cooperation of your Governor. It’s possible that President Goodluck Jonathan may be with us, but may God intervene, till 2019, and now that Kwankwaso is going next year, and we aren’t sure of his successor, I must remind you to study the script on the deposed Emir Mustapha Jokolo of Gwandu Emirate. Jokolo was deposed, “accused of making reckless statements capable of threatening national security….” by Gov. Aliero.

Making statements likely to be considered “reckless” by a threatened Presidency is an art you’ve perfected. It’s the height of indignity for monarchs who ought to be pacifists to allow themselves to be drawn into open political machinations. If Kwankwaso’s successor turns out to be uncooperative with the ways of the emirate, that grand palace may become a prison of despair.

Your role as a monarch has been restated, with nostalgia, by your predecessor, Alhaji Ado Bayero, who, on the occasion of his fortieth anniversary, as reported by one of your brilliant subjects, Abdulaziz Abdulaziz, said: “Da muke yi. Aka dawo ana yi da mu. Yanzu sai an yi a fada mana.” This is a lament, a declaration that the Emir is no longer constitutionally powerful since the British colonialists intervened and restructured our administrative systems. Loosely, it means: “We used to be in charge. Then we were relegated to consultants. Now we’re only told about decisions already taken.”

A friend of mine suspects that your long expressed ambition to become a monarch is a desperation to re-establish the role of the emirate, above the advisory role that stirred up Emir Bayero’s nostalgia. I hope this is not so. But I told him that an emir, especially of the conservative Kano, is culturally more powerful than the Governor and even the President, because he is the moral conscience of his people. This is where your antecedents as a progressive Muslim, thinker and intellectual are needed especially now that Islam is being demonised by dangerous religious charlatans, like the votaries of Boko Haram and other potentially militant groups and sects, who distort religious texts to abuse the essence of our humanity.

The Presidency is understandably ashamed of reconciling with you because you have shown us its dirty, and because you’re seen as principled and unforgiving. And to some, this elevation is not only the ascension to majesty but also an expansion of the aristocrat’s mental state. The power to resist the corrupting influence of this new status is now a test only time can prove: Emir Sanusi Lamido Sanusi will either become a revolutionary monarch, if his erudition and wisdom are not disabled in the palace; or, if the quest for vengeance possesses him, he’ll end up an unfulfilled uppity king. May God save us from us!