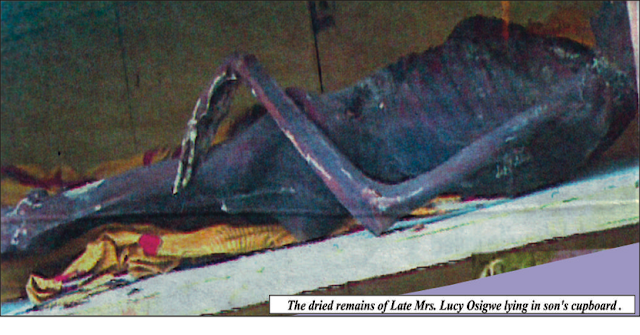 June 8, 2013  – Police Destroyed The Shrine Of Man Who Used His Mother For Ritual In Imo State

The shrine of controversial Chief Chimezie Bede Osigwe, the man who allegedly killed his mother, embalmed her body and kept the skeleton for about 10 years in his cupboard, has been destroyed by a combined team of Nigeria Police and Imo Security Network.

The presence of security personnel and a heavy duty pay-loader in the community elicited fresh anxiety among the people, even as they expressed delight at the destruction of the crime scene that brought collateral shame to the area.

Although it was not clear at press time, who gave the order for the demolition of Osigwe’s house, Vanguard gathered that the action might not be unconnected with the state administration’s stand on pulling down buildings that house criminals.

Some of the indigenes of the area commended the security men for “taking timely and decisive action on the house of crime.”

What baffled the people most was that Osigwe never told anybody what truly happened to his mother or gave the late woman a decent burial until her lifeless body was recovered.

It would be recalled that the police recently arrested Osigwe for allegedly killing his mother and keeping same for 10 years in his cupboard.