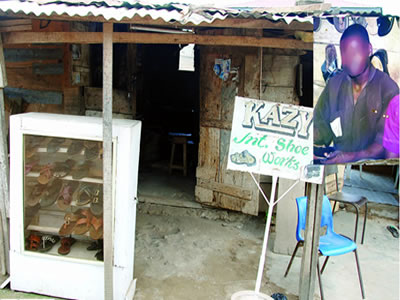 Residents of Soka area, along Ire-Akari Estate, Ibadan, Oyo State, were shocked to hear that one of them, a popular shoe maker in the area, Mr Kazeem Bamidele, also known as Kazzy International Shoe Works, had been arrested with human parts.

Saturday Tribune learnt that Bamidele was arrested on Monday night in connection with alleged murder of a Northerner, said to be an okada rider. The police, it was gathered, led him to his wooden shop on Friday morning and, according to sources, discovered fresh human head and legs of the victim where they were kept inside a bush behind his shop.

Sources further informed Saturday Tribune that Bamidele and his accomplice were busy perpetrating this criminal act on Sunday, around 1.00 a.m, when two vigilance members serving as security officers in the area became suspicious, and asked them why they stayed so late in the night.

According to sources, the vigilance group members saw two people around the bushy path in the area, one holding a knife while the other was holding a gun.

A source told Saturday Tribune: “On that fateful day, some members of the Oodua Peoples Congress (OPC) who are also vigilance men in this area saw the man (Bamidele) with another man in the night. When the OPC men asked them what they were doing in the middle of the night, one of them who was holding a knife told them that he wanted to use it to cut coconut. His partner was holding a gun.

“We were told that the OPC men had to confront them that almost everybody living around the area knew them as security guys; that the suspects themselves could not deny that they knew them. After minutes of conversation, Bamidele and his partner could not hold it again, giving the OPC men opportunity to move close to them. That was what gave them the opportunity to look through where they discovered what they were doing.

“They saw a body of a human being whose head and arms had been cut off. They (Bamidele and accomplice) were still trying to cut something from the victim’s throat. The area was littered with blood, and at that point, the OPC men raised an alarm, arrested them and attempted to invite the police.”

Police sources confirmed the development and informed Saturday Tribune that the suspects were currently under interrogation.

When Saturday Tribune visited Sanyo Police Station, the case was said to have been transferred to the State Criminal Investigation Department (SCID), Iyaganku, Ibadan. On getting to the SCID, it was discovered that the suspects were under interrogation, new discoveries having been made on the matter.

“The case is still under investigation, especially when new discoveries were made. There can’t be any comment on it now until the completion of the on-going investigation,” a police source said.

Meanwhile, some of the residents who spoke with the Saturday Tribune under condition of anonymity said nobody noticed that Bamidele was involved in such act. They said the story was like a rumour to them until Friday morning when some people suspected to be police officers came in company with the victim and fished out fresh human parts where they had been hidden in the bush behind his workshop.

One of them said, “Everybody believed it was a rumour until this morning (Friday) that we saw the fresh human head with the man. That means one must be very careful in this area.”

When Saturday Tribune visited Bamidele’s shop on Friday morning, one young man who refused to give his name, but was described as his (Bamidele’s) apprentice, was seen in the shop.