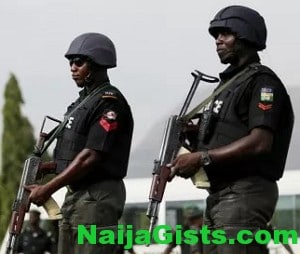 Aliyu was kidnapped on Sunday evening at about 6:30 pm around his residence at Turin Fulani area in Bosso local government area of the state.

A Source close to his family said that prior to his abduction, the DPO was seen outside his compound discussing with someone believed to be his friend in a relaxed atmosphere .

Some of his neighbours attested that he was seen outside as some of them claimed that he answered questions posed to him regarding his family.

Amos who had served as Deputy Commandant, Police Training School Minna, Divisional Crime Officer Kuta Division in Shiroro Local Government of the state and in Taraba state Police Command prior to his recent transfer to Serki Pawa Division is believed to have been kidnapped along with his Orderly.

The Source said that his wife, (names withheld) was also said to have left home as early as possible on Monday morning in her Toyota Highlander Sports Utility vehicle in search of her husband and attempts by neighbours to speak with her on phone was abortive as she was said to have switched off her phone .

“In fact, the DPO, stays in Tudun Fulani area of Bosso Local Government of the state. He was seen in the evening on Sunday at about the time the Muslims were going to say their prayers in the Mosque .

“At the time, he parked his Peugeot 406 car outside his compound and he was greeted and he responded to the greetings as well as exchanging pleasantries with some of his neighbours who stopped to greet him while someone believed to be his friend sat besides him on the fateful Sunday eveningn prior to his disappearance”, the source noted .

A team of Policemen believed to have been sent from the Police Command were seen around the DPO’s residence on Monday morning questioning people and making true the report that the DPO was missing.

However, efforts made by The Nation to speak with the State Commissioner of Police, Mr. Austin Iwero Agbonlahor and the Police Public Relation Officer (PPRO) proved abortive as he refused to speak on the incidence as of the time of filing this report.