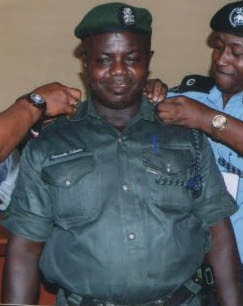 The 45-year-old DSP was shot by a 3-man robbery gang near his house at Sango area of Akure-Owo Road on Wednesday.

His body was discovered by residents in the wee hours of yesterday, Thursday the 20th of October with multiple gunshot wounds.

According to area residents, a neighbour came to their house around 7:30pm on Wednesday to inform him of the presence of some robbers in the area.

The deceased reportedly abandoned his food, took his service pistol and  followed the neighbour to the house opposite their’s in a bid to dislodge the robbers.

Sadly, the robbers who saw him from distance shot at him.

Another neighbour who witnessed what happened said Idowu Oyewole tried to exchange fire with the robbers but became weak and ran away from the robbery scene.

He reportedly slumped and died of his injuries while running to a nearby hospital.