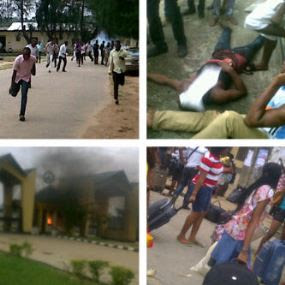 3 students at the University Of Uyo died during a violent riot that happened yesterday.

We learnt the VC of the institution announced that student should pay N100 daily to board the school bus from their hostels to their respective lecture halls.

The student protest the fee because the bus used to be free. The also complained of high GST fee of N2000.

The peaceful demonstration started with Engineering students. They marched to the VC office demanding their rights. Students from other faculties immediately joined hence the violent riot.

The security officials had no option but to call for back-up which led to the riot . The police who were supposed to calm the situation fired shots at the students and killed three innocent students, one has been identified as Kingsley a 200 level student of the department of zoology . The students on the other hand destroyed school properties, set the office of the V.C,  the school’s main gate and a hostel. The rampage went on for hours. The school has been closed down till further notice.

Nigerian students and their riot wahala.

May the souls of the innocent students rest in perfect peace.