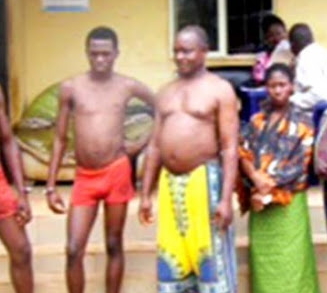 Delta State Police Command operativeshave arrested a child trafficking couple, Emeka Odili and his lover simply identified as Blessing, for allegedly abducting a three year-old-boy, Chukwunalu Adikwu, with an intent of selling him.

Odili who was said to be the prime suspect, allegedly kidnapped the victim said to be his sister’s son, in Onicha-Olona on February 25 and absconded with Blessing to Onitsha, Anambra state where they arranged to sell him.

Nkiru Odili, mother of the child, was said to have suspected foul play when her son suddenly went missing after her brother left her home and she promptly reported the case of her missing son at Onicha-Olona Police Station.

Quick response by the police operatives yielded result as the lovebirds were promptly arrested and their victim recovered unhurt.

While it was reliably gathered that the suspects had in the past sold their own child born out of wedlock, it could however not be ascertained whether they were into full time child-trafficking.