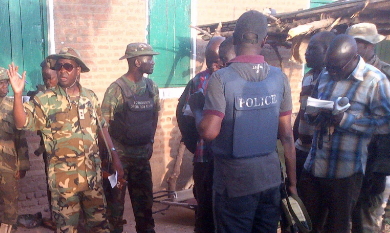 The trio are standing trial on two- count charge of conspiracy and assault.

According to the police, the defendants and the alleged victims are neighbours at Macarthy Police Barracks on Lagos Island.

She told the court that the incident occurred on February 10 at Macarthy Barracks.

According to her, a fight broke out following a heated argument during last Saturday’s clean-up exercise at the barracks.

The court heard that trio allegedly conspired and assaulted the policemen.

Chukwudi said the defendants beat the officers with belts and pushed them into a gutter.

According to the prosecutor, the offences contravened sections 411 and 172 of the Criminal Law of Lagos State, 2015 and punishable under same.

The defendants pleaded not guilty to the charges.

Chief Magistrate Adekomaiya granted each defendant bail in the sum of N50,000 and a surety in like sum.

Hearing on the case continues on March 14.