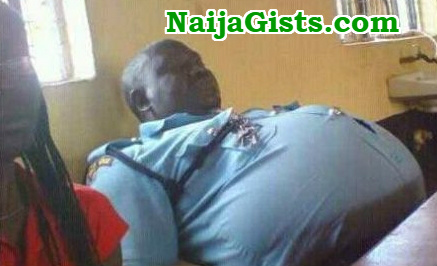 July 30, 2017 – Pot Belly Is Not A Sign Of Good Life, Your Belly Is Packed With Dangerous Fat – Doctors Warn

Those with a healthy overall weight but too much abdominal fat are more likely to be heart victims than generally obese people, researchers have discovered.

Omolara Akintoye writes that unlike in the past when protruding belly was associated with financial wealth, potbelly now poses a greater risk of death from heart problems than being generally obese, among others. A bulging belly is a vessel for life-threatening diseases

Recent report has it that a pot belly, a.k.a spare tyre’, is uniquely dangerous because it is packed with ‘bad fat’, doctors say. Having a pot belly – even if you are not overweight – poses a greater risk of death from heart problems than being generally obese, warn doctors.

A ‘spare tyre’ around the waist is uniquely dangerous because it is packed with ‘bad fat’, research has shown. The US study found that those who were not overweight but had a bulging midriff were 2.75 times more at risk of dying from cardiovascular disease than normal weight and a proportionate waistline.

In an interview with Dr. David Mwadi, a consultant with Federal Airports Authority of Nigeria (FAAN) Clinic, Port Harcourt, Rivers State, he said there are lots of diseases associated with potbelly which Nigerians should guide against. According to him, the health risk of pot belly is the same reported with obesity.

Belly fat in the midsection of the body is linked to a variety of health problems, including type 2 diabetes, high blood pressure. A beer-belly can double the risk of heart disease of any form and cardiovascular disease. Other health risks associated with obesity are: stroke, gallbladder disease, cognitive dysfunction, respiratory disorders, among others.

“The risk of developing these diseases is said to be higher when weight is concentrated near the waist (belly fat), warned Mwadi. Another reason why many African men tend to have pot belly, according to him, is when their eating is motivated by pleasure and not by hunger.”

Therefore, belly fat is actually reducing the male’s testosterone levels, which can lead to gynecomastia (breast formation) and erectile dysfunction. Both men and women are at risk for breast cancer if their gut carries more than it can handle. Higher levels of belly fat and body fat produce an enzyme that coverts testosterone to estrogen. In other words, the more body fat, the higher the estrogen levels in the body.

This eating phenomenon ultimately affects body mass and may be a factor in the continuing rise of obesity.

The only way to prevent pot belly, in the words of Mwaadi, is to cut down your calories intake and engage in more physical activities. Adding protein to your diet is the simplest, most effective and most delicious way to lose weight with minimal effort. Studies show that protein both increases your metabolic rate and helps reduce appetite. Because protein requires energy to metabolise, a high protein diet burned by up to 80 to 100 calories per day

Exercise helps to lose belly fat. Aerobic exercises like running, swimming, cycling and hiking are some of the best exercises that help reduce body fat. When losing weight, people tend to lose it first in the midsection area (abdominal area); which is good news for anyone looking to lose pot belly fat.

Note that, doing sit-ups, crunches, or other abdominal exercises strengthen your core muscles and help to hold in your belly fat, but won’t eliminate it.Good posture is another quickest way to reduce your pot belly. Another way to check potbelly is by managing your alcohol Intake. “Reduce your alcohol intake and you will absolutely reduce your pot belly. Research has shown that those who regularly drink alcohol have bigger bellies than those who don’t,” he warned.