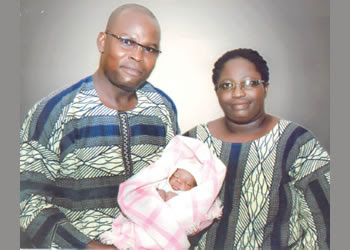 With men it is impossible but with God all things are possible.

This popular biblical verse has become a reality in the family of Mr & Mrs Adeoye who believed God for the fruit of the womb for over fourteen years after marriage.

Miraculously, Mrs Oluwakemi Adeoye became pregnant in 2011 and to her surprise nine months after, the baby refuses to come out.

She became worried and started going from one hospital to the other in a bid to find solution to her problem.

But as the Lord will have it, on the 15th of January this year, she gave birth to a bouncing baby girl within 5 minutes of labour.

The miracle baby has been christened Emmanuela, Opelope-Jesu, Ite-Oluwa-kii-si Adeoye

We use this as a point of contact for anyone believing God for the fruit of the womb, the Lord will surely answer you and 9 months after, you will live to glorify God. Amen…..