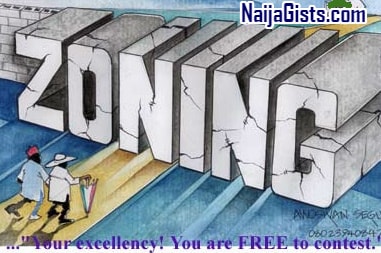 The Almighty Zoning Formula: One Of Many Mistakes In Nigerian Politics That Binds Us To Nightmare Of Bad Leadership

It is often said that it is tantamount to insanity for one to keep doing the same things over and over and yet expect a different outcome each time. This is the story of politics in Nigeria and of Nigerians generally. Over the many years that Nigeria has stood as one entity, we have made many mistakes as a nation that keep recurring, so much that they have become the tradition in these parts. Our political traditions are steeped in ‘wuru-wuru’ solutions and under-the-carpet treatment of issues that always take us back to where we started.

In the run up to the 2015 elections, there were many dramatic events within the People’s Democratic Party, PDP, the ruling party at the time, that led to jubilation and criticisms in the camp of the mega-coalition that became the All Progressives Congress, APC. The PDP men were ridiculed for being over-fed charlatans with no sense of direction or party cohesion. Whether the election defeat that followed was due to the apparent disorganization and hypocrisy within the PDP or due to the strength of the coalition formed by President Buhari and Asiwaju Bola Ahmed Tinubu, we know the story of 2015 ended in shame for PDP and glory for the newly formed APC.

Although the signs had been there all along, there were visible cracks within the APC during its convention at the Eagle Square in Abuja last Saturday and it may spell the beginning of another “about turn” in Nigerian political history. The clashing of factions and images of open brawling at the venue, even while the president was giving a speech was truly concerning for keen observers of the wuru wuru politics that we practice in the country. Although the ruling party was quick to disregard the brawling as mere skirmishes and disagreement between brothers, some observers know better about our political traditions.

If history has taught us anything, particularly in Nigerian politics, it is that little skirmishes like that witnessed on Saturday are the pre-cursors to further in-fighting and likely violence in this election season. As usual, the biting concerns of factions within the party have been swept under the party rug where they will grow and mature into full-scale battles that will damage the already weak fabric of the ruling party. We know this because we have seen it before. Little clashes here and there at a similar PDP rally not too long ago remind us of the consequences of denial and wuru-wuru solutions.

It is also symbolic that some of the fighting occurred while the president was giving his speech. The question is whether he was oblivious to the incident or unbothered about it as he continued his speech. This same question has been on the minds of Nigerians for many months as lives are lost and mayhem ensues. It seems that there is an elaborate act within and outside the country by the representatives of this government suggesting that everything is rosy in the country even though people are complaining daily and moving out in droves.

In the background of the politicking at the APC convention were heightened killings and bloodletting in different parts of the country, including in the very volatile Plateau State. Apparently, a robbery gone wrong was misinterpreted by locals to mean another attack by herdsmen and this led to many Fulani lives being lost in reprisals. Of course, there came Fulani retaliation and by Sunday afternoon, the death count had risen to about 86.

In a way, the chaotic appetite of the people in the affected areas of Plateau in the last attacks is not unlike that of our politicians. In election season, tempers are especially quick to rise and the propensity for violence in any given situation is high. The people expect more violence in election season, and the players in the political arena never disappoint. We have again come full circle to a period when the emotions of otherwise ordinary citizens are used by dubious agents to foment trouble and mayhem, with a view to influencing the voting public one way or the other.

Also, as the months to election draw nearer, we are likely to see a renewed vigour within the docile police and army formations, with critical last minute efficiency never before seen in the past 3-4 years. Their late ‘accomplishments’ will be brandied as a sign of the efficiency of a government that has fallen short of expectations on general security since 2015. Even with the expected posturing by security forces, by the time elections are over in 2019, the country may be reeling from election violence in hot beds of violence like Rivers State and also likely in places like Imo State where the power of incumbency appears to be under threat.

We must ask ourselves how long these terrible cycles will continue in a country that is determined to go head to head with its peers in Africa and the world. The citizenry seems to have been conditioned to expect and endure the worst at times like this. It is no wonder, therefore, that the same sorry events occur in cycles while we hold the power to put a stop to the shameful traditions that we find ourselves embroiled in. It is no co-incidence in Nigerian politics that the cautious optimism of the people at the beginning of presidential tenures is turned into raging dissatisfaction before the tenure is over and this malaise is replicated across all elective positions.

Another case of deja vu occurred in the passage of the budget, which, according to ‘tradition’, came stark in the middle of the year, with reductions in the allocations for projects that matter to the people and increase in projects and expenses that matter to the pockets of the members of the legislature and their cronies. Not only that, there was also the traditional name-calling between the legislature and the executive even as the president signed the budget. The politicians are now expected to go shopping for gratitude and appreciation from the people for taking their sweet time to perform their constitutional duty.

Right now, there are many fears and expectations in this election season that will most likely come to pass. It will be refreshing, however, to see things going out of the script of Nigerian politics for once. After all the cries for change that preceded the 2015 elections, it seems that the change we thought had come was superficial at best, with below average players in the political landscape arriving to substitute scandalous contemporaries. The political formation is still the same and the tactics remain unchanged. One of the many mistakes in Nigerian politics is the almighty zoning formula that binds us to the nightmare of bad leadership.

One wants to wake up in a few years’ time to an unfamiliar terrain in Nigerian politics where actions have consequences and the future is of paramount concern. A future where government arms work seamlessly together and political parties have solid ideologies and party structures that ensure continuity and people oriented goals outside campaign halls. One wants to see a future where Nigerians return home from abroad during elections and not the other way round. It is difficult to imagine such a future as we are inhibited by the curse that forces us to continually relive the inglorious past.

There are many traditions that we keep in Nigeria that are positive and encouraging for visitors. Our political traditions however present a quandary for investors coming into the country and well-meaning Nigerians going into politics. The fact is that if the investors do not come, we will not progress and if good people do not participate in politics, we are equally doomed. It then remains a question of how to break our pathetic political traditions before we become traditional examples of under-development.