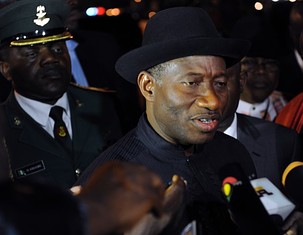 Below is a very important report from Premium Times for all Nigerian internet users.

The President of the Federal Republic Of Nigeria, Goodluck Jonathan has secretly awarded an Israeli company a $40 million contract to monitor the internet activities of Nigerian citizens.

It is one of the most far-reaching policies ever designed in Nigeria’s history to invade the privacy of citizens.

The Jonathan administration secretly, and in open violation of lawful contracting procedures, has awarded an Israeli firm, Elbit Systems, with headquarters in Haifa, a $40million contract to help it spy on citizens’ computers and Internet communications under the guise of intelligence gathering and national security.

Elbit announced the contract award Wednesday in a global press release but was silent on the Nigerian destination of the contract. Its general manager, Yehuda Vered, opaquely announced that “Elbit Systems will supply its Wise Intelligence Technology (WiT) system to an unnamed country in Africa under a new $40 million contract announced on 24 April… for Intelligence Analysis and Cyber Defense,” but effusively claimed, in the statement, that his company is “proud to be selected to supply this unique system, which is already field-proven, fully operational and customisable.

“Elbit Systems is a world leader in the fields of intelligence analysis and cyber defense, with proven solutions highly suitable for countries, armies and critical infrastructure sites. We hope that additional customers will follow in selecting our highly advanced and cutting edge systems in these fields as their preferred solution,” Mr. Vered added.

Multiple and very reliable sources in the administration confirmed to PREMIUM TIMES that Nigeria is indeed the “unnamed African country,” and with details from the Elbit statement, our sources say the contract will now help the Jonathan administration access all computers and read all email correspondences of citizens in what is clearly, an infringement on constitutionally guaranteed freedom of expression.

No single policy of this administration has so far affected, in one fell swoop, the lives of 47 million citizens, a third of the Nigerian population and about four times the number of voters who brought the president to power two years ago.

This development has not always gladdened public officials in Nigeria many who have expressed open displeasure at the use of the Internet by social media activists and the power of its possibilities as an empowering medium for popular communication. The calls for regulation have been loud in both the administration and in the Nigerian legislature.

The earliest hint that the Jonathan administration had desires to invade privacy of citizens surfaced ealy April when researchers at the Munk School for Global Affairs at the University of Toronto alerted the world that Nigeria, Egypt, and Kenya were deploying Internet surveillance and censorship technology developed by an American company, Blue Coat, which specializes in online security. Blue Coat’s technology will allow the government to invade the privacy of journalists, netizens and their sources. Its censorship devices use Deep Packet Inspection, DPI, a technology employed by many western Internet Service Providers, to manage network traffic and suppress unwanted connections.

Civic groups kick against DPI because, they say, it makes it possible for censors to look into every single Internet Protocol packet and subject it to special treatment based on content (censored or banned words) or type (email, VoIP or BitTorrent Protocol).

DPI not only threatens the principle of Net Neutrality and the privacy of users, civic groups say, it makes single users identifiable and, in countries that flout the rule of law and violate human rights, often exposes them to arbitrary imprisonment, violence or even torture.

While details on the Blue Coat contract appears to have managed to evade scrutiny up till this point, PREMIUM TIMES sources say the Elbit annunciation of the contract, opaque as it was, terribly rattled top administration officials – from the presidency to the National Security Adviser’s Office, and the National Assembly.

“The presidency had wanted this contract to be a top secret,” said one of our sources. “The presidency did not envisage that Elbit was going to make it public. Monitoring computers and Internet use is a contentious issue and the National Security Adviser had tried to keep the contract secret.”

Elbit says it will take it two years to complete the project, by which time it claimed, the administration will have “a highly advanced end-to-end solution, [to] supports every stage of the intelligence process, including the collection of the data from multiple sources, databases and sensors, processing of the information, supporting intelligence personnel in the analysis and evaluation of the information and disseminating the intelligence to the intended recipient…[that] will be integrated with various data sources, including Elbit Systems’ Open Source Intelligence (OSINT) solution and Elbit Systems’ PC Surveillance Systems (PSS), an advance solution for covert intelligence gathering.”

The administration had indicated in the 2013 budget that it would procure a Wise Intelligence Network Harvest Analyzer System, Open Source Internet Monitoring System and Personal Internet Surveillance System at a cost of N9.496 Billion ($61.26 million).

Now that the contract has been awarded to Elbit for about  $40million, it is unclear if the National Assembly will raise questions as to what becomes of the extra $21million earmarked for the project.

Investigations indicate that in awarding the contract to the Israeli firm, no tenders or calls for bids were made just as there were no public announcements. The contract was awarded following a proposal from a single vendor who dictated the contract sum and the terms of the contract.

The procedure for public procurement of services as stipulated by the Bureau of Public Procurement (BPP), the Nigerian agency charged with the duty of ensuring transparency in all matters concerning government contracts, were largely ignored. In addition, there are no public records indicating that the BPP approved this contract.

The manner of award directly contravenes the 2007 Public Procurement Act. While the Act gives room for single source contracts, the Elbit contract met none of the requirements under which such special contracts could be awarded.

Section 47 (3) (iii) of the 2007 Act stipulates that single source contracts are to be awarded in emergency situations such as “natural disasters or a financial crisis”.

Calls to Elbit’s headquarters in Haifa, Israel, were also unanswered.

Shari Clarkson, a spokesperson at the company’s subsidiary in the United States declined comments on the contract saying only Dalia Rosen, a spokesperson based in Israel, could comment. Rosen’s phone was unanswered.