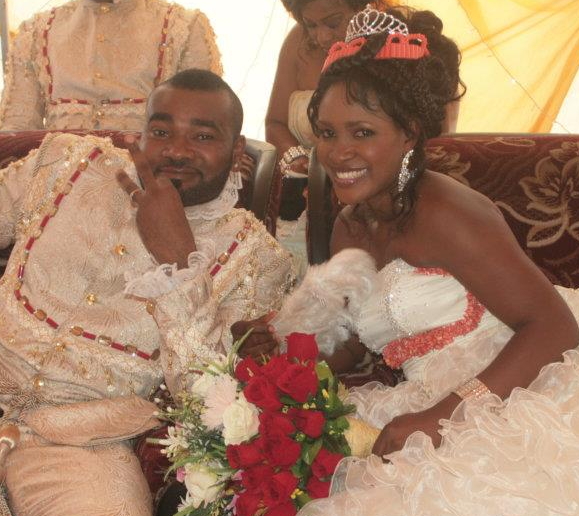 The attraction was magnetic! She was the singing diva and he, a Nollywood star. And before one could say Jackie Robinson, they were headed for the altar to tie the nuptial knot in a grand ceremony held in Port Harcourt, the Rivers State capital.

The wedding of Prince Eke and Muma Gee was one of the biggest society events of 2011. However, five years after, there are feelers from the couple that it might be all over for the duo; no thanks to Muma Gee who filed for divorce earlier in the week.

The first time the pair met, it was at the naming ceremony of Emeka Ike’s child at a Redeemed Christian of God (RCCG) parish in Lagos. For Prince Eke, it was love at first sight.

Recounting that first meeting in a chat, Eke said: “The reception she accorded me was not warm. She even laughed at me. It took me about 40 minutes to decide whether to approach her or not. She was the woman I was supposed to spend the rest of my life with and I knew it as soon as I saw her.”

Corroborating her estranged hubby, Muma Gee also gushed in an interview: “We met inside the church during Emeka Ike’s child dedication ceremony. Emeka introduced us to each other and that was how our love story started. My husband proposed to me the same day I met him. He knelt down to propose to me and since then, I have remained his faithful wife.”

No sex before marriage

According to interviews granted by the singer, owing to her strong Christian faith, they shelved courtship and opted for marriage immediately. “I didn’t want to commit any sin at this stage of my life because I have cleansed myself,” Muma Gee had revealed after their wedding.

To ensure that Prince Eke was the right man, she insisted there would be no sex before marriage. “I told him that if the whole thing was a gimmick to bed me, he was on a wrong mission. He promised we wouldn’t have sex until we were married. That gave me the conviction my hubby was different from others,” Muma Gee said in another interview.

Indeed, it was with joy that the couple had their first set of kids, a lovely boy and girl on April 18, 2014. They had taken to social media and posted adorable pictures of their bundles of joy. The pictures had gone viral and Prince Eke at every opportunity posted images of his wife and family, saying how much they meant to him.

According to an industry source who spoke on grounds of anonymity, Prince Eke was the perfect husband and Muma Gee, the lovely wife. Together they presented a front that sent colleagues in the industry going green with envy.

In 2016, their bond waxed stronger after they had a baby girl on Prince Eke’s birthday and that further sealed their union. So overjoyous was the actor that he posted on sociak media a picture of the baby with the caption “My bundle of joy …my birthday mate, mydaughter. ..#GLADIATOR #AwesomeGod#OKWULUOKA,”.

Indeed, Prince Eke and Muma Gee were the poster couple of Nollywood.

How The Marriage Crashed

Contrary to the promising picture the couple painted, it was with shock that on December 16, 2016, cracks began to appear on the wall after Eke took to Instagram to declare that his wife had abandoned home and her three month-old baby. He said he had become a single father of three kids while he accused his wife of frolicking with different men at niteclubs in Abuja.

“This is no cheap publicity,” Prince Eke had stated. “I am not washing my dirty linen in public neither do I want to evoke pity. How nice is it for a woman to abandon her three-month old baby for four weeks and run off to Abuja with God knows who and is being seen at public joints and nightclubs with different men?

“I really can’t stomach it any longer and at this point, the world should know for posterity sake,” he allegedly wrote in a post which he later deleted.

His statement had aroused reactions on social media. While some blasted him for washing their dirty linens in public, others took sides with him.

Muma Gee had replied swiftly in a chat on HipTV. Hear her: “I got married and became a full time housewife for five years. I gave the marriage all my life, all my time, but if the persons involved are restless a bit, you can’t be in control.”

Prince Eke had fired back a while later declaring that Muma Gee was into fetish practices: “If infidelity, adultery and certain fetish activities do not make you restless, then prepare to rest in peace,” Eke allegedly posted.

Could this have been the straw that finally broke the camel’s back?

On January 15, 2017, Eke finally pronounced that his marriage to Muma Gee was over after an initial statement credited to him that the music act was not the breadwinner of their home. Only last week, after months of silence, the drama reached a climax with Muma Gee suing for divorce.

Entertainer learnt that repeated attempts by friends, elders and colleagues to resolve the marriage impasse failed and neither party was ready to bulge. However, given Prince Eke’s latest post, Muma Gee felt it was time to move on, hence she filed for divorce.

A source said: “The latest development coincided with her performance at the Silverbird Man of The Year Awards, a platform which she used to relaunch her career. It is obvious that Muma Gee is ready to carry on with her life and embrace single motherhood,”

Confirming the crash of the marriage recently, Don Saint, Muma Gee’s publicist said the reason for the divorce was that Muma Gee was scared for her life after the alleged latest threats from her estranged hubby.

With Muma Gee’s latest move, it is obvious that the romance could be over for good. However, this could turn out to be a long and dirty divorce as both parties are at daggers drawn.

Single Ladies! Here Is How To Attract A Godly Husband For Marriage
Imperfect Me: Shooting Ends For Oge Okoye’s New Movie