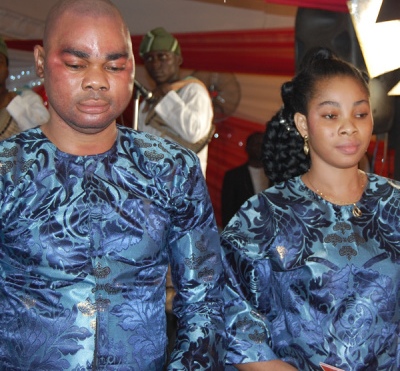 The wife of controversial Prophet Ireti Ajanaku, the founder of Christ Revival Victory Chapel international in Lagos who died under a mysterious circumstance last year has opened old wounds again.

Mrs Joy Ajanuku who has resumed the duty of a pastor since the death of her husband is saying the man is still alive.

In this latest interview with City People Magazine, hear what Joy said about the alleged ogboni (occultic) prophet.

“To those saying my husband is dead, I am telling them that they are talking out of ignorance. They are not spiritual and it is only spiritual people that will understand what is happening right away. It is a sin to say bad things against men of God and I am a living experience that he is not dead. Whenever I call upon his God, he answers me. A lot of people have lots of testimonies.So I am telling them not to ever refer to him as a dead Prophet Elijah Ireti Ajanaku.I leave them to God if they do that. At the appropriate time, they will know the truth about the whole issue. Even before this death rumour, I remembered he told the large congregation that he will cause commotion and the whole world will come to look for him. When it happened, we all knew my Daddy said so. This is the commotion he talked about but I know God will vindicate him.”

Days after his death last year, his faithful church members believed their founder will soon resurrect.

After days of prayers and fasting for his resurrection, they gave up and buried him. #lobatan