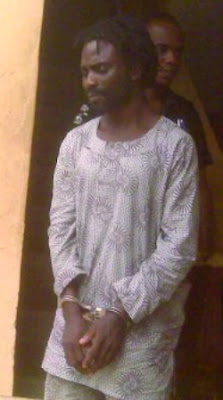 A prophet, Samson Egbeola, is now in prison custody at Kirikiri after he was arraigned in court for allegedly engaging in sex with a house wife, Mrs Franca Michael, in order to prepare love potion for her. The incident happened at Egan, Lagos State, southwest Nigeria.

The mother of two kids alleged that Prophet Egbeola engaged her in marathon sex for several weeks under false pretense.

Thereafter he shaved her pubic and armpit hairs, cut her nails and mixed them with other things which he gave her to use to prepare meal for her husband so that her husband would love her.

She confessed that she used the concoction to cook vegetable soup which her husband ate, yet the love potion did not work on her husband as the prophet promised her.

Franca said instead of her husband to love her more, he hated her and even  left their home.

The 40-year old prophet Egbeola was arraigned before Ejigbo Magistrate’s court, Lagos for conduct likely to cause breach of public peace, obtaining sexual intercourse under false pretence and preparation of fetish charms under the Criminal Code Laws of Lagos State.

The 26-year old Franca from Ogwashi- Ukwu in Delta State is married to Michael from Bayelsa State in south south Nigeria.

Prophet Egbeola who is married and has four children, is from Ogun State, southwest Nigeria.

According to Franca, she was introduced to Egbeola by her friend when she suspected that her husband had another woman.

She narrated that her friend took her to the prophet’s house at 16, Akewusola street, Egan, Lagos where he also uses as church.

She told the prophet that her husband, Michael, no longer loved her as before because he was sleeping outside his matrimonial home.

During the counselling, the prophet told her that her marriage was in danger and would soon collapse.

He told her that he saw another woman taking over her husband  and to prevent that from happening, there was need for serious prayers and he would prepare some potion she would use on her husband.

According to the woman, Egbeola told her that she would pay N30,000 and such prayers involved having sex with her.

The seemingly desperate woman paid the money and had sex several times  with the prophet.

According to her, “he also inserted candles inside my private part, shaved hairs from my private part and armpits, cut my nails which he crushed and mixed with other concoctions and gave me to use to cook food for my husband.”

According to her, the prophet also asked her to bring her husband’s photo which she did and he used candles and black and red robes and tied them together and kept it on his altar.

Trouble started after obeying his directive by sleeping with him and using the concotion as directed to cook which her husband ate and it did not work. Rather, the relationship worsened.

It was then she went to her husband and confessed and pleaded for forgiveness.

According to Michael, he noticed changes in her behaviour and decided to keep away from her and started sleeping in the office.

He said he knew that she was up with something but did not know the extent, and throughout that period, he was also facing a lot challenges.

When she confessed and narrated what happened, he knew the prophet had used and defrauded her and he had to intervene.

He said he has forgiven her.

The matter was reported at Igando police division and Egbeola was arrested and charged to court.

When P.M.NEWS contacted  Egbeola, he said that the woman came to him complaining of her husband and he assisted and offered her prayers.

He said he was happy and grateful to God that the prayer worked and they are now living together again.

He declined to speak on whether having sex with Franca was part of the prayers to reconcile the couple.

When Prophet Egbeola was arraigned in court, he pleaded not guilty.

The presiding Magistrate, Mrs. M. B. Folami granted him bail in the sum of N250, 000 with two sureties  in like sum.

He was, however, remanded in prison custody at Kirikiri pending when he fulfils his bail condition.

The matter was adjourned till 3 April, 2013 for definite hearing.