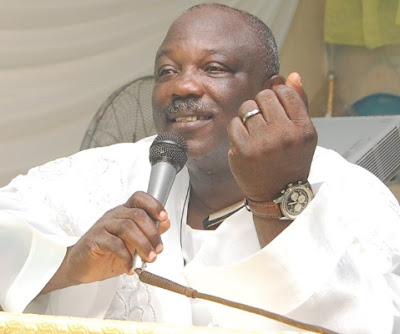 PDP Is Dead And Buried; APC Is On Danger List & Needs More Blood To Resuscitate Itself

The founder of Celestial Church of Christ in Alakuko area of Lagos, Marcus K.O Tibetan has revealed that God is done with the APC and PDP political parties.

Tibetan predicted that a candidate from a new party would emerge the next President of Nigeria.

As the race to the 2019 general election gathers momentum, many clerics have been making their predictions known. While some have predicted President Muhammadu Buhari’s return, some others insist that PDP would produce the next President.

But Tibetan said that God showed him a 55-year-old fair-complexioned man, an economist from Edo State, who would become Nigeria’s next President. He added that the former minister of education and co-convener of the #BringBackOurGirls campaign, Mrs. Obiageli Ezekwesili, would be chosen as Vice President.

He advised President Buhari to forget his re-election bid. The cleric noted, however, that Buhari would stubbornly contest again but would lose woefully. According to the prophet, members of APC and PDP should not bother spending time and money preparing for the election for the number one seat as it would be futile, if they refuse to heed to his warning.

He made the revelations known recently in Lagos, at the presentation of his book, Revelations 2018. The controversial man of God, whose followers spread beyond Nigeria, has, since 2005, been releasing prophecies on personalities, economics, politics, sports and others, on the local and international scenes.

Tibetan said that the present administration led by Buhari has failed the masses. He recalled his 2015 prophetic declaration, where he warned that Buhari was the people’s choice but not God’s. He, therefore, tasked Nigerians to ensure they collect their permanent voters’ cards and make use of them in 2019.

Tibetan said it was unfortunate that Nigerians keep wasting precious time praying for things that prayers cannot upturn. He said to overcome the ravaging hunger in the land, more people need to go into farming.

“There is nothing like prayer in these political and economic crises bedevilling Nigeria. Prayer is actually one of the major problems Nigeria has today. It has made many people to become so lazy to the extent that they believe God will do everything for them without their own effort. They will tell you God will do it and it is well, when nothing is actually well with them. It is high time we stopped deceiving ourselves, because prayer cannot cook rice.

“Buhari knows for sure that he has failed. It is better for Buhari to leave now because the Lord revealed it to me, even before 2015, that he is the people’s choice but not God’s. If we must move forward, the next President is coming out from Edo State and the Lord has revealed him to me. Ezekwisili will be instrumental to rebuilding Nigeria through the new government. PDP is already in the casket and buried, while APC is on the danger list, looking for more blood to resuscitate itself,” he said.

When asked about his aim in publishing books of prophecies every year, he told the reporter that he was only doing the work that God has assigned him to do without expecting any reward from anybody. He said he would continue to convey God’s messages to those in authority and others holding key positions in society, in order for the country and the world to become a better place for all to live in.

On why Nigeria has not made appreciable progress since gaining independence 57 years ago, the cleric said it was not surprising that the country was far behind other nations, noting that Nigeria has always been governed by recycled people. He said most of the people that have ruled Nigeria had little or no knowledge on how to transform the country.