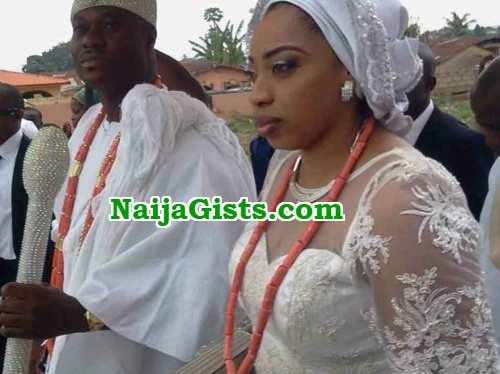 It is official! Queen Wuraola has packed her belongings from the Ooni of Ife’s palace at Enuwa area of Ile Ife.

According to The Elites Magazine, close friends of the embattled Benin born lady disclosed that she has been walked out of the 17-months old marriage.

Even though the media office of the Ooni Ogunwusi has been issuing lame press releases, debunking the crash of the marriage, sources revealed that the marriage between the couple has crashed, and no amount of denial would be able to cover the despair that had characterized the union.

Sources disclosed that Olori Wuraola, who was described as being financially buoyant before her marriage to Oba Adeyeye Ogunwusi, has become financially deflated.

Invariably, her friends are bitter with how the Ooni and his three controversial sisters treated her with indignity. They also revealed she wasted her “resources” on a marriage she never enjoyed for a day.

“She was making millions from her businesses before she met Ooni Ogunwusi but Sonia (as Wuraola is fondly called by friends) is broke now. It was gathered that she had thought she was going into a wealthy home, but it didn’t take her long before she realized that the Ile-Ife palace was a place where people would feast on you and your wealth,” her friends revealed.

According to sources, the day Wuraola went to the palace to retrieve her belongings, it was disclosed to that she was disallowed from taking her bedding furniture.

Her bed? What could possibly be so special about a bedding furniture?

“Yes. Her bed which she made with her money, the sources disclosed.
It was learnt that Wuraola, after her wedding had decided to make an exquisite piece of bed furniture when she discovered that the old bed in her room was made of ordinary wood. Invariably, she had to make an exquisite one which she used throughout her stay in the palace. Sadly though, when she went to pack her luggage from the palace, she was not allowed to take the bed she spent a fortune on.

“If you thought Wuraola enjoyed a blissful sexual life in the exquisite bed, then you might just be wrong. She was abandoned alone in her bedroom and has not received a ‘royal touch’ in the last eight months! You know there is a new queen who is Yoruba, who enjoys the favour of Ooni Ogunwusi’s sisters.

The three sisters were alleged to have done their best to ensure that the Ooni snubbed Sonia’s bedroom. It’s just painful that they didn’t allow her take the bed she made with her money,” friends of the Olori Wuraola said