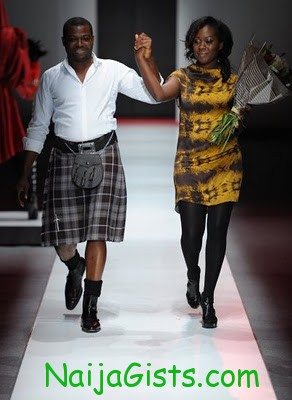 In March 2009, Bunmi Olaye set up a luxury fashion and art label with the love of her life, Francis Udom. They called it Bunmi Koko. For two and a half years the label won several awards, featured in several fashion shows around the world, had their clothes worn by important dignitaries, including Michelle Obama. They seemed unstoppable. In December 6th 2011, the Bunmi Koko label announced that co-founder, Bunmi Olaye was stepping down from the label, which already has operational business subsidiaries in the UK, SA and South America. Sources say it was due to work and romance wahala.

As at now, the hardworking fashion icon is planning to start her own independent label…thing is, after all the work she put in for almost three years to make Bunmi Koko a household name, she now has to start all over again.

Question of The Day: Is it a good idea to start a business empire with your boyfriend?

Merry Xmas and happy new year in advance, with love from your friends at https://naijagists.com

7 thoughts on “Question Of The Day: Is It Advisable To Start A Business With Your Boyfriend”