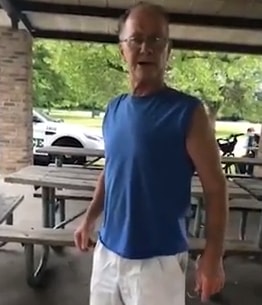 62-year-old Timothy Trybus, a racist who was caught on video harassing a young woman because she wore a shirt with Puerto Rico Flag at a park in Chicago last month has been officially charged with felony hate crime.

This was disclosed by Cook County prosecutor’s office spokesperson.

On the 14th of June 2018,  Trybus can be heard yelling at 24-year-old Mia Irizarry at the Caldwell Woods Forest Preserve in Chicago.

Shockingly a police officer stood by and did nothing to rescue the victim.

The officer later quit his job after his photo went viral.