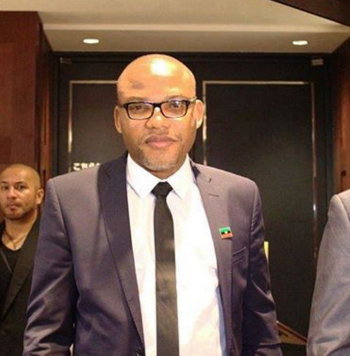 Radio Biafra boss, NNadmi Kanu who was arrested on his arrival to Nigeria from the UK last week is still in detention.

According to sources, Kanu is still unable to pay his N2million bail.

Meanwhile, members of Indigenous Peoples of Biafra (IPOB) yesterday took to the streets of Onitsha and its environs to protest the continued detention of their leader and Director of Radio Biafra Mr. Nnadi Kanu who was nabbed at the Lagos Airport last week.

The protesters, numbering about 3,000, took-off from Amafor in Ogidi, marched through Tarzan, New Parts, Nkpor Junction to New Market in Onitsha, chanting songs of solidarity and secession. They called on President Muhammadu Buhari and security agents to leave the group alone.

They also called for the immediate release of Kanu, whom they said did not commit any crime but came into the country like every other person yet “was arrested and detained for no just cause,” stressing that no Biafra group is violent.