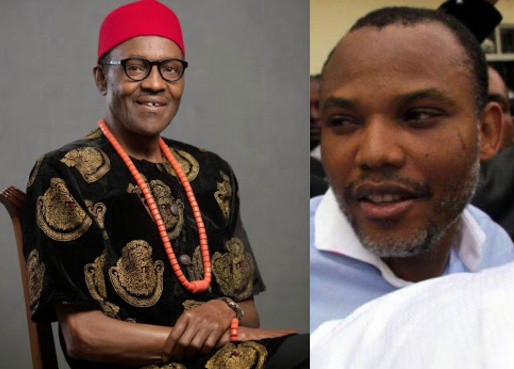 At last Radio Biafra boss Mazi Nnamdi Kanu, the founder of a Pro-Biafra group, IPOB has tendered an unreserved apology to the President of the Federal Republic of Nigeria, Muhammadu Buhari over an insensitive comment he made about him a while ago.

This came in the wake of a video recording of Mr Kanu where he branded President Buhari as a terrorist and urged every Igbo man to take up their gun and fight for the freedom of Biafra.

In an open letter to Buhari, Nnamdi who buried his pride said all he was trying to do was to draw the attention to the suffering of his Igbo brothers and sisters all over Nigeria.

The letter reads in part, “Reference to the President of the Federal Republic of Nigeria as a terrorist, evil and a paedophile is regrettable and uncalled for and for that, I unreservedly apologise and will be doing so in a private letter to the President.

“Before PMB (President Muhammadu Buhari) there was the administration of Goodluck Jonathan. I also said uncomplimentary things about him and Igbo elders as well, which I now recognise should not have happened because it is un-African to be rude or insolent to elders.

“All I was trying to do is to draw attention to the problems afflicting society and something done about them.”

Kanu, who described himself as a Nigerian and a British citizen, justified his agitation for a Biafra Republic.

He said IPOB’s secessionist agenda was informed by the “incessant hardship, lack of holistic development in the socio-economic landscape of Nigeria, lack of youth employment, corruption in high offices and economic regression.”

“I can confirm that I, Nnamdi Kanu, is the leader of Indigenous People of Biafra worldwide as a legitimately and duly registered body at the United Nations pursuing the rights of a specific indigenous people, in this case, Biafra, to seek self determination according to the said charter.

“The reason for the formation of the Indigenous People of Biafra is to avail those referring to themselves as Biafrans the opportunity made available as a result of the United Nations declaration to seek the peaceful rebirth of Biafra in line with international law.”