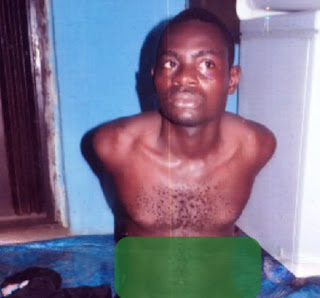 Three young men, suspected rapists who specialize in promising  their victims the sum of N30,000 after a night stand have been arrested in Edo State.

The suspects identified as Lucky Oni, Sylvester Ijeh and Patrick Achugbue were paraded at the police headquarters in Benin City.

Police said the trio used a room hired by Patrick as their operational base.

It was gathered the suspects’ mode of operation was for any of them to lure a girl to the base and after sleeping with her, others will take turn to have sex with the girl with a promise to add more money to what was promised.

However, their trouble started when Lucky paid his victim N1,000 instead of N30,000 even after Patrick also have sex with her.

Lucky was having sex with another girl Sylvester lured to the base in the afternoon when police swooped on them.

Speaking to journalists when they were paraded at the state police command, Lucky denied raping the girl but admitted that his friend slept with her.

He said: “I picked a girl at Ramar Park. She demanded for N30,000 and I know I do not have such money, so I agreed. I accept that I will give her the money. I told her to follow me home. When we got to my house, I slept with her and I gave her N1000. I did not know that she has other thing with my friend. My friend slept with her and gave her N2000.

Sylvester added: “I met the girl at Ikpoba-Hill. I told her I will give her N30,000. I took her to my friend’s house at Ikpoba-hill. I deceived her that I will pay her after I slept with her in the morning. My friend here, Lucky entered the room and told the girl he would add money to it. He was on top of the girl when policemen stormed the house and arrested us. It was the first girl he slept with that brought policemen. I know I was not having money to give to her.”