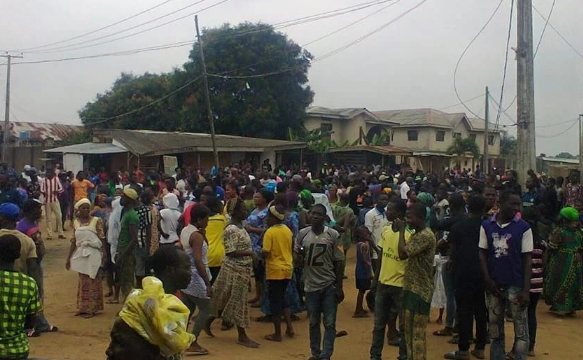 A 27-year -old man, Essien Effiong, who allegedly defiled a four-year-old girl was on Monday arraigned in Lagos.
Effiong, who resides at Ajegunle in Lagos, is facing a count charge of defilement at an Apapa Senior Magistrates’ Court.
The Prosecutor, Sgt. Kokoye Olusegun, told the court that the accused committed the offence on Sept. 8 at his residence.
Olusegun said the accused lured the girl into his apartment with biscuit and had carnal knowledge of her without.
“When the girl tried to escape the accused forcefully dragged her back into his room and started putting his fingers into her private part.
“When the pain was too much for the girl, she started screaming and a neighbor, who was passing by the room at the time, heard her voice.
“The woman immediately bashed into the room and to her surprise the accused was naked and was inserting his finger into the girl’s private part.
“The case was reported to the police and the accused was immediately arrested,’’ Olusegun said.
The prosecutor said the offence contravened Section 137 of the Criminal Law of Lagos State, 2011.
The accused, however, pleaded not guilty.
Section 137 prescribes life imprisonment upon conviction for child rape.
The Senior Magistrate, Mr M.A. Etti, granted the accused bail in the sum of N50, 000 with a surety in like sum. The case was adjourned till Nov.1 for mention.

In a related development, a 33-year-old man, Godwin Otobo, was today docked at a Surulere Chief Magistrates’ Court in Lagos. For allegedly defiling a nine-year-old girl, ‎Otobo, who lives at No. 10, Borrow Pit St., Sangotedo-Ajah area of Lagos, was said to have defiled the underage girl whose parents also reside in the same compound.
The Prosecutor, Sgt. Anthonia Osayande, told the court that the accused committed the offence at about 9.00 p.m. sometimes in September.
“The accused defiled the girl in the night when she was fetching water.‎
“The offence contravened Section 137 of the Criminal Law of Lagos State, 2011,’’ Osayande told the court.
The accused pleaded not guilty to the one-count charge of defilement.
Ruling on a bail application filed by the accused, Chief Magistrate Ipaye Nwachukwu, granted him bail in the sum of N500,000 with two sureties in like sum.
She said one of the sureties must be a property owner in Lagos State, while the other must be a civil servant on grade level 12.
She said that the sureties must also provide evidence of tax payments to the government.‎
The case was adjourned to Dec. 13 for advice from the State Director of Public Prosecutions (DPP).