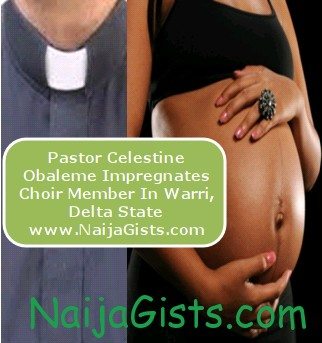 We recently shared with you the news of a Pastor who committed suicide in Warri, Delta State recently (read it here). naijagists.com

The circumstances surrounding his death wasn’t known at that time.

As at today, we have uncovered the mystery surrounding his death.

The Pastor is an RCCG Pastor in a parish in Enerhen, Warri, Delta State Nigeria.

Pastor Celestine Obaleme killed himself in order to escape shame inflicted on him by his illicit affair with one of his church’s choir member. naijagists.com

Pastor Celestine Obaleme who is in charge of a Redeemed Christian Church Of God Parish in Enerhen, Warri Delta State reportedly impregnated a choir member identified as Rose.

We learnt he later pleaded with Rose to terminate the pregnancy which she refused blatantly.

Rose claimed she doesn’t want to lose her life to the proposed abortion.

He went to extent of giving rose 2 Million Naira, which she refused , even after explaining to her that her refusal to abort the pregnancy may lead to the fall of the parish.

After all efforts to force Rose to terminate the pregnancy failed, he was reported to have drove himself to Udu Bridge, a popular bridge in Warri.

He then poured petrol on himself, lit himself and was burnt to death.

Late Pastor Celestine was a married man with an 8-weeks old baby.

May the Lord have mercy on his soul!