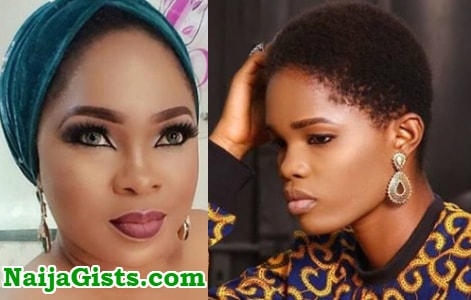 Nollywood actress Regina Chukwu has narrated how her first daughter Rachael was snatched away from her at the age of 3 shortly after her husband’s burial years ago.

According to Regina, she was forced to live away from her daughter for almost three years.

Here is an emotional story she shared in celebration of her daughter’s seventeenth birthday;

“Do you believe that this daughter of mine was once snatched away forcefully from me???? She was barely 3yrs old then. Do you believe that I was forced to live apart from my daughter for close to 3yrs??? Let me take you on a journey down memory lane .

When death took away their father and I was totally lost in this world, then came family and traditions (story for another day) they told me that I can’t go back to the city with my 2 children unless I accepted some conditions, which I was quick to accept, even at that, they told me I could only go with Richard cos I was still breastfeeding him then, I thought it was a joke but that very morning my late husband’s sister who lived in Enugu city then said she was going back to base with her and she was going to register her for school there ( I was still mourning my husband then) I cried, I begged, couldn’t watch them take her away, so I ran after the car, fell, stood up and ran as fast as my legs could carry me, ran after the moving car but I couldn’t catch up (emotions) the story of how I got my baby back and more I intend to tell as a movie someday the great news is that, this is that babygirl standing next to me almost taller than me lol and she now drags my cloth with me. pls celebrate my first fruit with me.”

Continue Reading
You may also like...
Related Topics:regina chukwu daughter