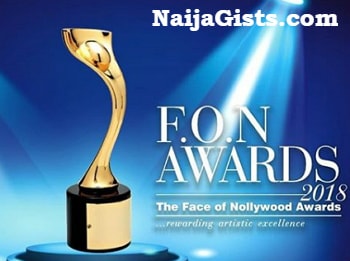 Total Television Studios, in partnership with Organseed International, has returned with the second edition of the Face of Nollywood (FON) Awards years after its maiden edition was held.

The award event designed with the aim of discovering the most popular Nollywood personality, will hold on Saturday the 30th of June at Transcorp Hilton, Abuja. According to the event’s organizers, the reward system will stand out because movie lovers will get to pick the winners themselves.

162 popular acts, made up of veterans and newbies have been lined up for as contestants for the award.

Speaking at the unveil, which took place at Tivoli Gardens, Ikoyi, Lagos last Thursday, CEO of Total Television Studios, Ifeanyi Ikpoenyi said that the idea behind choosing a face, rather than several faces in several categories as is the case with other awards is what sets Face of Nollywood awards miles ahead of its closest competitor.

“The idea is to discover someone who has a recognizable huge fan base, uncommon acting talent and a star personality that millions of Nigerians home and abroad as well as Africans can clearly identify with, display open admiration for and look up to for inspiration and hope. Such a personality does exist and may shock us all who he or she turns out to be.”

Continue Reading
You may also like...
Related Topics:2018, award, face of nollywood