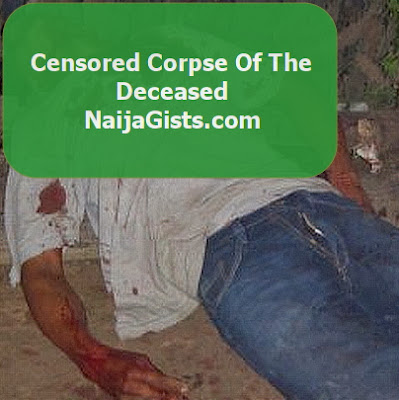 An ex-soldier has killed his own son in Akure, the capital city of Ondo State Nigeria.

The murder happened on Tuesday at Maronu St in Araromi area of the city.

It was revealed that immediately after the incident many of the residents fled the area for fear of being arrested by security operatives.

It was gathered that an argument broke up between the duo over payment of supplementary Power Holding Company of Nigerian (PHCN) electricity bill, despite the best efforts by neighbors to settle the matter between the father, Major Adedipe and his son, Ayo.

After being repeated abused by his son, sources told DailyTimes that the ex-military officer went inside their house picked up his gun and shot his son in the chest at close range. The boy died immediately.

Many residents, who spoke, described the incident as quite surprising and said they were disappointed with the actions of the father whom they said they begged severally to forget the matter.

According to girlfriend of the deceased, Olaide, the incident happened after Ayo’s father discovered that the late Ayo had not being paying the electricity money handed over to him.

Olaide said the father found out that his son had been diverting the money but would show his father fake electricity bills as proof the money had been paid.

Daily Times learnt that, Ayo’s Father on realizing he had killed his son hurriedly carried his body out of the compound to unknown destination.

A commercial motorcyclist was said to have raised an alarm after seeing the ex-military man in a bush at Onigari, Shagari Village Akure trying to dump the body in the area, prompting Major Desilva Adedipe to take to his heels.

Confirming the incident, Spokesman of the Nigerian Police Force, Ondo State Command, Wole Ogodo, said one Olaide, who claimed to be the girlfriend of the deceased, reported the matter to them.

“The compliant rushed to the station and said the suspect whom they used to call ‘Old Soldier’ allegedly shot his own son during an argument over NEPA bill” Ogodo said.

Ogodo said men from the command swung into action immediately the incident was reported and went after the assailant were the body was found under a tree.

He also said the remains of the deceased has been deposited at the state specialist hospital morgue in Akure while an autopsy will be carried out.

The Police image maker however said the case has been transferred to the state’s Criminal Investigation Department while he promised that they were on the trail of the suspect.